Seoul Motor Show is ready to make a splash

Seoul Motor Show is ready to make a splash

Seoul Motor Show, one of the largest trade shows in Korea, kicks off Friday at Kintex in Goyang, Gyeonggi, and will introduce 36 new cars to Korea, including five cars debuting for the first time ever, according to its organizing committee Sunday.

This year, the event runs under the slogan “Sustainable. Connected. Mobility.” for 10 days through April 7. Reflecting its slogan, the exhibition zones will be themed based on each of the keywords.

The Auto Makers World section will host 21 auto brands, including six local auto brands - Hyundai Motor, Kia Motors, GM Korea, Renault Samsung Motors, SsangYong Motor and Genesis - and 15 foreign brands, including BMW, Mercedes-Benz, Jaguar and Toyota. Tesla is the only auto brand that will not make an appearance in the zone. The electric carmaker will instead be exhibiting in the Mobility World section, which will focus on displaying futuristic cars and driving technologies, such as electric vehicles, drones and robots.

The automakers in attendance will show off a total of 154 different vehicles.

While details remain sealed regarding which new cars will be unveiled, some have offered a peek into what they will show off to attract auto fans to the event. 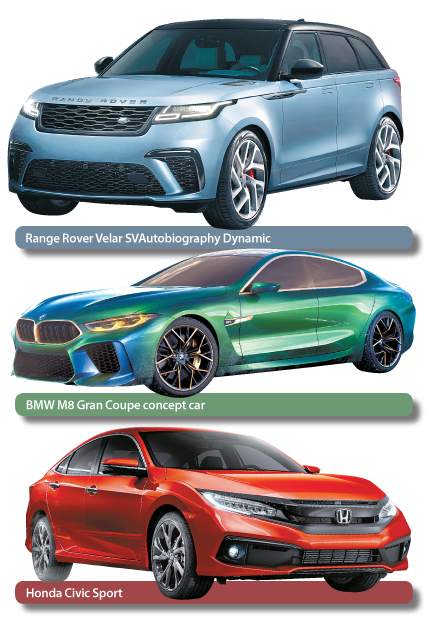 Kia Motors said it will world premiere two concepts for two of its sport-utility vehicles (SUVs). While there was some speculation that its Telluride SUV, targeting the North American market, would also be exhibited at the Seoul Motor Show, a Kia Motor press officer said the car will not be there.

Renault Samsung Motors will introduce its XM3 Inspire Show-car concept for the very first time at the event. Only a teaser image of the car, without details, was unveiled before the motor show. SsangYong and GM Korea’s major exhibits will feature SUVs. SsangYong is coming with its latest Korando, which was released last month. GM Korea said it will show off its Traverse SUV and the larger Tahoe SUV as well. Tahoe, being introduced for the first time in Korea, is the second largest car in GM’s SUV lineup.

Jaguar Land Rover Korea said that it will unveil its midsize SUV, the Range Rover Velar SVAutobiography Dynamic Edition, for the first time in the world at the Seoul Motor Show.

The SUV is a limited run product available for purchase for one year only. It drives on a 5.0-litre V8 supercharged engine that enables a maximum output of 550 horsepower and maximum driving speeds of 274 kilometers per hour (170 miles per hour), according to the company.

Among Japanese automakers, Honda said it will unveil the Civic Sport for the first time in Korea. The Civic sedan has been renewed with Honda’s driving assistant program Honda Sensing and turbo engine, according to the company.

The Mobility World section will include a total of 24 companies, including local electric car companies including PowerPlaza, Cammsys and Semisysco, as well as five dronemakers. More than 30 mini electric cars will be exhibited for consumers to actually see and purchase, the committee said.

The Sustainable World section will be focused on hydrogen fuel-cell technology as the Korean government chose the technology as one of its future growth engines for the auto industry. Korea’s largest automaker, Hyundai Motor, has been specifically focused on making fuel-cell cars. Hyundai’s Nexo hydrogen-powered SUV will be the zone’s main exhibition. Energy companies, including Korea Electric Power Corporation and Korea East-West Power, will introduce how to make the auto industry run on sustainable energy through their batteries and electric car charging stations.

In the Connected World section, five companies, including autonomous car tech companies like Unmanned Solution and mobile carrier SK Telecom, will exhibit their technologies. Participating for the first time, SK Telecom will introduce its 5G-based mapping technology that can complement navigation systems in autonomous driving cars and quantum cryptography technology that can improve car security systems.