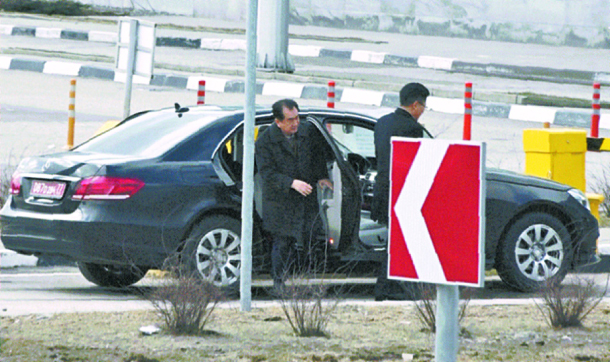 Kim Chang-son, left, a North Korean official with the North’s State Affairs Commission, gets out of a car at Sheremetyevo International Airport in Moscow, Russia, on Saturday, after arriving in the city earlier that week. [YONHAP]

A senior North Korean official has left for Vladivostok in Russia’s far east after ending his trip to Moscow in what is seen as part of preparations for a possible visit there by the North’s leader Kim Jong-un.

Kim Chang-son, an official with the North’s State Affairs Commission, was spotted at Sheremetyevo International Airport in the Russian capital city at around 2:45 p.m. Saturday.

He was in Moscow for five days.

Escorted by two guards, he quickly went into the VIP section, while four others who appeared to be accompanying Kim entered the boarding gate.

The Russian Aeroflot SU 1700 flight carrying Kim took off at 4:10 p.m. and was expected to land in Vladivostok early Sunday.

The visit by Kim, known as Kim Jong-un’s de facto chief of staff, raised speculation that Pyongyang could be making preparations for leader Kim’s first trip to Russia since taking office.

A vehicle possibly carrying Kim Chang-son was seen coming into the Kremlin every day from Wednesday to Friday, suggesting the official held talks with Russian counterparts over logistics and protocol.

Since Kim Chang-son is bound for the Russian port city, it may be that leader Kim is considering either Moscow or Vladivostok as the venue.

Ahead of Kim’s visits to Singapore in June last year and Vietnam last month for his summit meetings with U.S. President Donald Trump, Kim Chang-son visited the two cities well ahead of time to make logistical and protocol preparations.

Since the breakdown of last month’s summit between Kim and Trump, North Korea has been stepping up its diplomacy with Russia, with three senior North Korean officials making back-to-back visits to Russia this month.

A delegation of Russian senators also visited Pyongyang this week.

North Korea’s ambassadors to China and the United Nations arrived in Beijing on Saturday, five days after they returned to Pyongyang.

North Korean Ambassador to China Ji Jae-ryong and Ambassador to the United Nations Kim Song were seen at Beijing Capital International Airport earlier in the day after boarding an Air Koryo flight from Pyongyang.

Their visit to Pyongyang could have been aimed at attending an annual meeting of the North’s overseas diplomatic mission chiefs, a source said. But the North could have used the opportunity to brainstorm ideas about its negotiating strategy with the United States.