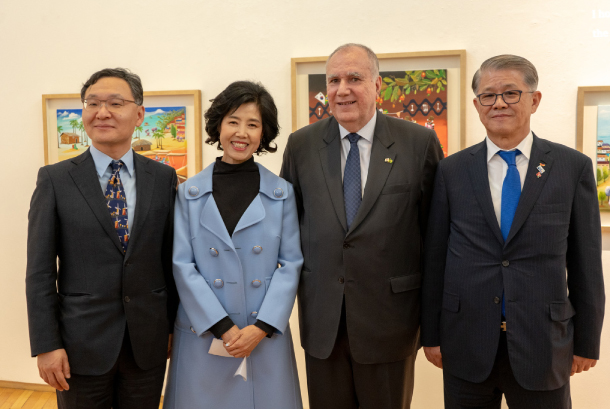 From right, President of the Korea-Brazil Society Choi Shin-won, Brazilian Ambassador to Korea Luis Henrique Sobreira Lopes, artist Jeon Ok-hee and Director-General for Latin American and Caribbean Affairs of Korea’s Foreign Ministry Jo Yung-joon at the opening of Jeon’s exhibition at the Brazil Hall of the Brazilian Embassy in Seoul on Tuesday. [EMBASSY OF BRAZIL IN KOREA]

To celebrate 60 years of relations between Brazil and Korea, the Brazilian Embassy in Seoul and the Korea-Brazil Society (Kobras) are jointly hosting an exhibition of paintings that depict the bucolic life of northeastern Brazil through the eyes of Korean artist Jeon Ok-hee.

“They’re depictions of the everyday life that I have encountered in Brazil,” Jeon told the Korea JoongAng Daily on Tuesday at the opening ceremony of a series of cultural events planned by the embassy and Kobras to celebrate the six decades of relations between Brazil and Korea this year. “I know there are certain features unique to my painting,” said Jeon, who lives in Sao Paolo and started painting on a trip to Salvador in the Brazilian state of Bahia, “and when I held exhibits in Brazil, locals found them especially amusing and interesting as they see their own people through the eyes of a Korean.”

Jeon’s 42 acrylic paintings use vivid colors to depict the marketplaces, fields, women and children of Bahia. They are on display on the first floor of the Brazilian Embassy, which was transformed into a hall dedicated to Brazilian arts and culture last year. The exhibit, “We Are One,” is open to the public from 11 a.m. to 6 p.m. every day until May 19.

“This art exhibition is one of the initiatives we intend to organize this year, stressing the importance of strengthening the bonds that unite our two cultures and peoples,” said Ambassador of Brazil to Korea Luis Henrique Sobreira Lopes.

The Brazilian Embassy in Seoul is hosting a series of cultural programs for the year.

Earlier in the year, the Brazilian Embassy in Seoul and the Korean Embassy in Brasilia held a public contest for artists to create a logo for the 60th anniversary, selecting a work by Lee Ji-young, who was born in Sao Paolo and currently living in Busan.

The embassy plans to hold in April a book signing event with Grandpa Chan, the pseudonym of another Korean artist living in Brazil, Chan Jae, whose Instagram page of his paintings for his grandchildren has more than 340,000 followers.

In addition to Jeon’s exhibit, the embassy will organize contemporary art exhibitions including that of Jac Leirner in September and “Dear Amazon,” a video exhibition in collaboration with VideoBrasil and Ilmin Museum, a concert by the Assad Brothers in July and a national day gala in September.