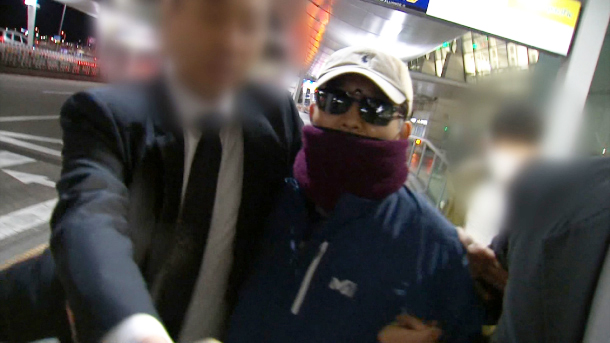 A former deputy justice minister under investigation for alleged involvement in a major sex scandal was prevented from apparently attempting to flee the country early Saturday morning.

While Kim claimed he had no intention to flee Korea - as proven by a return ticket for April 4 - the conduct of Kim and his entourage at the airport suggested meticulous planning ahead of time.

A man in a white mask flanked by two bodyguards and a fourth figure were swarmed by reporters on their way out of the airport after being turned away from the flight to Thailand. The man in the mask pushed his way through the crowd and reacted to the shower of questions as if he were Kim himself. In fact the real Kim - according to footage obtained by JTBC - was the fourth figure in the entourage whose face was hidden by a burgundy scarf and sunglasses.

Kim Hak-eui served as the No. 2 official in the Justice Ministry for six days during the Park Geun-hye administration in March 2013 before he resigned over allegations that he attended parties thrown by a contractor who hired women to have sex with high-profile figures to gain business favors. That scandal evolved into a drug-and-rape case when a woman claimed that she was drugged and raped by Kim and the contractor, Yun Jung-cheon, and was videotaped against her will having sex with them.

Perhaps more alarming are the allegations that the Park administration actively obstructed the initial investigation into Kim’s case, which eventually ended with no charges filed that November.

According to a police source familiar with the investigation cited in a KBS report Saturday, the chief police investigator looking into the case received a phone call from the Blue House about Kim before the probe had effectively kicked off, allegedly putting pressure on the investigation. This was followed days later by a direct visit to police headquarters by a Blue House official who reportedly relayed that President Park Geun-hye herself felt very “uncomfortable” and “burdened” by the probe into Kim.

Nearly a month into the probe, an almost unprecedented reshuffle in the police leadership took place that saw all figures from the Commissioner General down to the case detective replaced with new figures, allegedly on orders by the Blue House. When investigators briefed the new Commissioner General, Lee Sung-han, on Kim’s case on March 29, he implied the inquiry should not proceed further, saying “if one hurts others, he too will be punished,” according to the source.

Investigators nonetheless pushed through with a four-month probe into the case, after which they concluded Kim had received numerous sex services from 2007 to 2012, and that Yun had hosted a number of parties with high profile figures in attendance in order to gain favors, based on testimony from some of the women hired to have sex with the guests. Kim, police said, was clearly seen having sex with one of the women in three video files they obtained while investigating Yun.

Prosecutors, however, rejected this conclusion, saying the woman in the videos could not be identified. All 10 of the warrants filed by police to tap Kim’s phone records or seek his arrest were denied by the prosecution.

A second probe launched in July 2014 at the request of a woman who came forward to reveal she was Kim’s sexual partner in the videos also resulted in no charges, adding to speculation that a systematic coverup took place. The prosecutors involved in Kim’s case all went on to play important roles in other cases that ended in ways favorable to the Park government.

With the mandate of a fact-finding team into the case now extended by two months after an order by President Moon Jae-in last week, prosecutors are positioned to reopen an investigation into Kim, whose attempt to flee on Saturday could work against him. The renewed probe is also likely to expand into one concerning possible obstruction of justice by Park administration officials, spurring momentum for the establishment of an independent investigation agency focusing on crimes committed by high-ranking government officials.