Rain, snow, hail and some very strong winds couldn’t stop the legions of Korean baseball fans from turning out to support their favorite teams as the season started over the weekend. 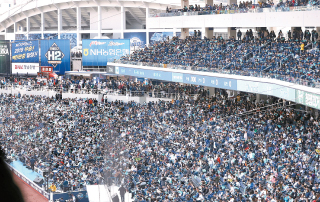 The 2019 KBO season finally kicked off and the 10 teams had no problem maintaining their fans for another year. Over the weekend, the KBO saw a total of 214,340 fans visit the five stadiums where games were held to cheer on their favorite teams.

On Saturday, a total of 114,028 fans visited the five stadiums, setting a new record for the biggest crowd on opening day. It easily exceeded the previous record - 96,800 in 2009.

Saturday also saw the second-biggest crowd in the league’s history. The opening-day crowd across all five stadiums had just 58 less people than the current record, set on May 5, 2016.

On Sunday, a total of 100,312 fans turned out. This is the first time in KBO history that more than 100,000 people attended games on two consecutive days.

Contributing to the figures was the official opening of the NC Dinos’ new stadium, Changwon NC Park, in South Gyeongsang. For the opening game against the Samsung Lions on Saturday, the Dinos had a sellout crowd of 22,112 fans. On Sunday, they once again had more than 20,000 seats filled in the stadium.

Changwon NC Park is a newly built stadium that holds twice the number of fans as the previous ground, Masan Baseball Stadium. Although the Dinos lost their opening game to the Lions 3-4, fans stayed until the bitter end and continued cheering for the Changwon team.

The swanky new stadium has been highly anticipated, especially because it quite literally lets fans get a bit closer to the game. The closest seat is just 14.7 meters (48 feet) away from the field. The Dinos also narrowed their foul zone and made the slope of the infield seats more gradual, allowing fans to see more clearly from any seat.

The 33.1 meter-wide screen also makes sure everyone in the stadium knows what’s going on.

In addition to Changwon NC Park, four stadiums had a sellout crowd on opening day. The game between the SK Wyverns and the KT Wiz at Munhak Baseball Stadium in Incheon was the only game not to sellout.

At Jamsil Baseball Stadium, the only game to be played in Seoul, a sellout crowd of 25,000 fans attended to cheer for the Doosan Bears and the Hanwha Eagles. Over in Gwangju at the Gwangju-Kia Champions Field, the fan favorites, the Kia Tigers, also had a sellout crowd of 20,500 fans for their opening game against the LG Twins.

Finally at Sajik Baseball Stadium in Busan, the Lotte Giants had a sellout crowd of 24,500 fans in their opening game against the Kiwoom Heroes.

Starting today, the KBO clubs will continue their season with a three-game series starting at 6:30 p.m.