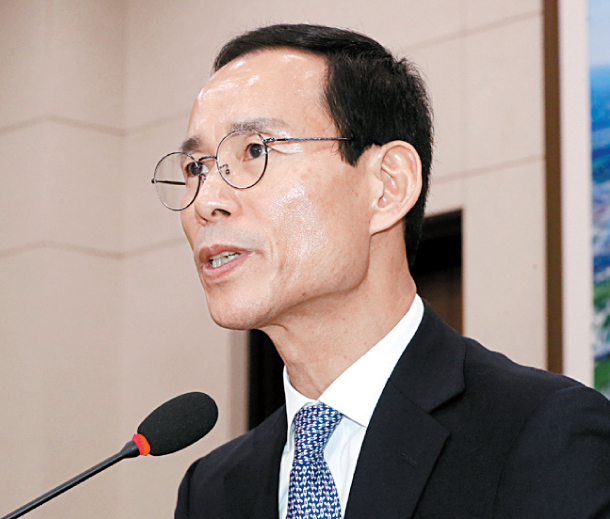 The Moon Jae-in administration’s nominee for land minister apologized over suspicions that he speculated in real estate at a confirmation hearing but denied all allegations against him.

Choi, President Moon’s pick to head the Ministry of Land, Infrastructure and Transport, said at his confirmation hearing Monday that he deeply apologized for owning a number of apartments.

Choi denied accusations that he purchased those apartments for speculative investment purposes, which is considered a no-no in Korean politics. He said he actually purchased the apartments to live in.

The land minister nominee currently owns three apartments, one of which is currently under construction in Sejong.

He said he is planning to move into the apartment in Sejong when it is completed in August.

Although there are no rules that ban a would-be minister from owning multiple residences, many questioned if a multi-home owner is fit to take strong measures against property speculation, a Moon administration priority.

Choi is also suspected of having made more than 1 billion won in profit in a suspicious real estate deal. The nominee said owning multiple homes is an “undesirable behavior” and that he purchased his houses to live with no intent to make a profit.

“I had a chance to look back on my life as a civil servant in preparing for this hearing,” Choi said. “I sincerely apologize for not fathoming Korean people’s minds deeply enough.”

During the confirmation hearing, Choi said he will work to lower the country’s real estate prices and stabilize the market. Housing prices have recently slowed after strong government measures in September last year that included blocking mortgages for multiple homeowners.

“The measures implemented on Sept. 13 last year have recently been coming into effect,” Choi said at the hearing. “But we cannot yet decide for sure that the real estate market is stabilizing.”

Choi also vowed to expand public housing to meet global standards, while maintaining his position to support the construction of the new Gimhae airport.

“The current public rental housing inventory rate of Korea is 6.7 percent, lower than the Organization for Economic Cooperation and Development average inventory rate of 8 percent,” Choi said. “If appointed, I will work to bring up this rate to 9 percent by 2022.”