Lotte takes its duty-free business down under

Lotte takes its duty-free business down under 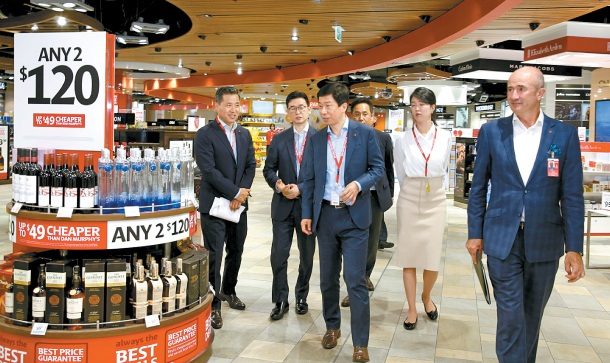 Lotte Duty Free held an opening ceremony in Brisbane Monday to celebrate the launch of its business in Australia.

The first Korean duty-free operator to enter the Australian market, Lotte’s goal is to generate more than 200 billion won ($179 million) in sales from Australia this year, backed by an increasing number of Chinese tourists to the country.

Australia has risen as a popular country among duty-free operators, partly due to the rising number of Chinese tourists.

Australia was picked as the most popular long-distance travel destination by Chinese tourists alongside the United States this spring, according to a report from China’s largest tour agency Ctrip. The report showed Australia has annually seen an average 10 percent growth of Chinese tourists over the five years from 2013 to 2017.

Lotte’s Brisbane Airport store sells 600 brands, which range from cosmetics to alcoholic beverages and accessories in a 2,795-square-meter (30,085-square-foot) space - the biggest out of the five stores in the region. One of the popular services offered at the branch is its whiskey bar.