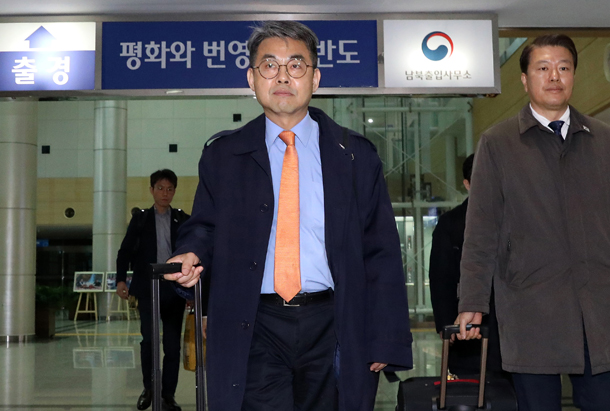 South Korean officials working at the inter-Korean liaison office, including its deputy chief officer Kim Chang-su, front, pass through customs on their way to the North's border town of Kaesong Monday morning. Some North Korean officials returned to work at the office Monday despite pulling out only three days earlier. [NEWS1]

About four or five North Korean officials were working in the office on Monday. That was around half the normal workforce before Friday’s order from “higher-ups” for everyone to leave.

It remains unclear what the reduced number of North Korean officials means for regular operations of the office, but a senior Unification Ministry official said that the communication channel between the two Koreas has been restored to its original state.

South Korea dispatched its regular number of personnel – a total of 64 officials – to the office Monday morning expecting an empty building, but found some North Korean officials working according to what they said was “a regular schedule.” The head of the North’s liaison delegation was not present, but the chief communications officer was, and the four or five took part in a regular morning conference with their South Korean counterparts.

For the Moon Jae-in administration – which has a major stake in keeping North Korea engaged in diplomacy – such pronouncements from the North and a dialup in its aggression following the summit sparked concerns that a year’s worth of reconciliation could dissolve and revert the peninsula back to a state of tension.

According to a senior diplomatic source in Washington, another factor in U.S. Secretary of State Mike Pompeo’s refusal to meet with South Korean Foreign Minister Kang Kyung-wha was Washington’s discontent with the Blue House’s interpretation of a phone call between Trump and Moon following the Hanoi summit.

In an official statement on the conversation released on Feb. 28, the Blue House announced Trump had asked Moon to play an active, mediating role in negotiations. But according to another source familiar with the White House’s position, what Trump really told Moon in the phone call was that the South should convince North Korea to accept the United States’ proposal of a “big deal.”

In spite of these developments, the South’s presidential office remains steadfast in its optimism for future negotiations, with a Blue House senior official on Monday maintaining that the situation has not changed.

“North Korea and the United States have the same objective but with differences in their strategic outlook,” the official said. “We are in the position of moving forward by persuading both sides.”