Ko Jin-young, the latest champion on the LPGA Tour, has broken into the top five in the world rankings for the first time. 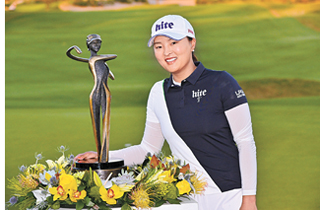 Ko Jin-young poses with her trophy after winning on Sunday. [YONHAP]

Ko reached a career-best No. 4 in the world rankings, announced Tuesday, on the strength of her victory at the Bank of Hope Founders Cup in Phoenix over the weekend.

Ko jumped five spots from the previous week, and she’s now the second-highest ranked Korean after world No. 1 Park Sung-hyun. Ryu So-yeon at No. 5 and Park In-bee at No. 8 are the two other Koreans inside the top 10.

In Phoenix, Park Sung-hyun finished at 14th and Park In-bee finished 34th. Ryu did not compete.

The world rankings evaluate a player’s performance over a rolling two-year period weighted in favor of the current year, and an extra emphasis is placed on the most recent 13 weeks.

The victory in Phoenix was Ko’s third career LPGA win but her first in the United States. With the win, Ko took home $225,000 in prize money. Her win also allowed Korean golfers to continue their dominance this season - of the six LPGA tournaments so far this year, Korean golfers have won four.

Ko, who turned professional in 2013, also had a successful career on the KLPGA Tour, where she won nine tournaments over four seasons.

Throughout the 2016 season, when world No. 1 Park dominated the KLPGA Tour by winning six tournaments, Ko was considered her biggest competition, winning a total of three. When Park moved to the LPGA Tour, Ko was considered the player to beat in the KLPGA.

The LPGA Tour will continue at the Kia Classic from tomorrow.