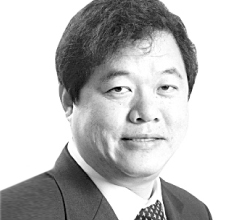 Kang Joo-an
The author is the social news editor of the JoongAng Ilbo.

“Your highness, please put on your mask!” said a character in the animated film “Nausicaä of the Valley of the Wind,” directed by Hayao Miyazaki in 1984. The film takes placeon Earth 1,000 years after an apocalyptic war. When Princess Nausicaä, destined to save a human race living in poisonous air, briefly takes off her mask, other characters are shocked and shout at her to put it back on. The film showed a poisoned Earth in a distant future, but that is already our reality. Although the government is busily working, experts say there is no hope for a while. The following are their reasons.

A research team from the Asan Medical Center of Seoul recently conducted a study on the correlation between fine dust and pneumonia. The study revealed an important finding. When exposed to the same concentration of fine dust, the risk of pneumonia was higher for those under 18 and those over 65.

In another study of about 70,000 lung cancer patients, it was discovered that air pollution was more harmful to early stage patients. 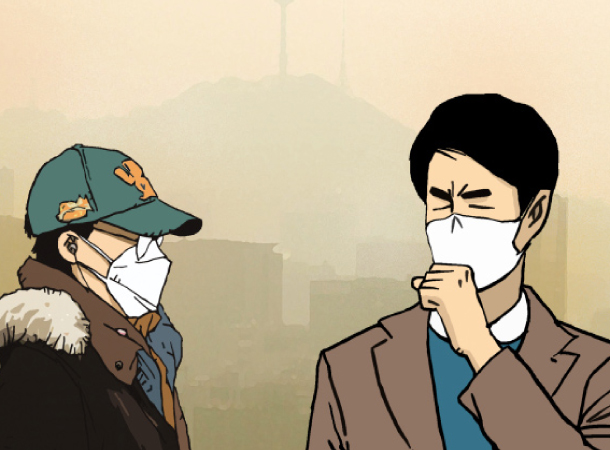 Although the research must be expanded, the researchers said they are frustrated with legal barriers. “Although it is urgent to conduct research on fine dust, the government refused to provide data because it contains personal information,” said Ulsan University Prof. Choi Chang-min at the Asan Medical Center. Though researchers asked the government to remove the personal information and offer the data, their request was still rejected. “We must first grasp the situation to talk to China or whoever is responsible for the situation,” Choi said.

It was 1996, during the Kim Young-sam administration, that the Korea Environmental Industry and Technology Institute produced its first report saying that air pollution causes annual economic losses of 2 trillion won ($1.76 billion). After media outlets reported that conclusion, speculations rose that the government would start a campaign to reduce dust. But nothing has changed since then: the government is just updating the figure on economic losses as the years pass us by.

On March 17, the Hyundai Research Institute issued a report saying that economic losses caused by fine dust amounted to 4 trillion won. It is likely that we will be doing nothing but calculating the economic losses from fine dust in another 23 years from now.

The Ministry of Environment is facing criticism that it has no accurate information on where the fine dust is produced and how serious the problem is. There is no disagreement that Korea’s research is far behind that of China. Lately, the ministry is featured in the media more frequently for suspicions of blacklisting public servants, not for its efforts to reduce fine dust. Former Environment Minister Kim Eun-kyung spent a day in court at a detention warrant hearing as a prime suspect in the blacklist scandal, although the detention warrant was denied in the end.

Are things different for local governments? A solution presented by Seoul Mayor Park Won-soon is absurd. Park said the city will use special paint on buildings to absorb fine dust and use plasma inside tunnels to reduce fine dust. Experts are baffled.

Gyeonggi Governor Lee Jae-myung’s solution is ambitious. He said he will consult with the Shandong, Guangdong and Jiangsu provincial governments in China on measures to reduce fine dust. The three Chinese provincial governments agreed with Incheon Mayor Park Nam-chun last year to cope with fine dust jointly. We wonder what has happened since then.

Former United Nations Secretary General Ban Ki-moon is now tasked with resolving the fine dust issue. It is not the first time that an elder statesman without expertise was asked to handle a sensitive issue. For instance, former Supreme Court Justice Kim Ji-hyung was tapped to resolve the conflict over the phasing out of nuclear power plants, while another former justice of the Supreme Court, Kim Young-ran, was commissioned to find a solution to problems in the college admission system. The future of nuclear plants and the state of college admissions are still chaotic.

On March 21, Ban Ki-moon was hopeful that he would have a chance to meet Chinese Premier Li Keqiang at the Boao Forum for Asia, scheduled for this week. On the same day, however, Foreign Minister Kang Kyung-wha said, “Depending on the seasons, the [fine dust] created in Korea travels to China by winds.” Concerns grow that Li will complain to Ban that Chinese people are suffering from fine dust originating from Korea.

Do we have any hope? Among the youngsters, Huh Kyung-young has risen as a hero, just like Nausicaä in the 1984 anime. His fine dust lectures are popular on YouTube. He says Korea should unite with other small countries and pressure China to establish a pollution reduction mechanism. He also says the people must strengthen their health so that they won’t get sick from a heavy load of fine dust.

When he ran for president in the past, Huh once promised to give 30 million won to parents who have a baby and 700,000 won in a monthly subsidy to every senior citizen. His pledges were once subject to ridicule by comedians. But they became reality as local government heads actually implemented such policies.

Do we have to wait for a miracle? It is unrealistic for us to pray that cold weather will stay during spring and rains will come every day to wash away the fine dust? As experts have pointed out, we must start basic research on the source and amount of fine dust and its effects on human bodies.