Three decades in, Yoon Jong-shin celebrates 30: The singer-songwriter has recruited artists for his latest music project

Three decades in, Yoon Jong-shin celebrates 30: The singer-songwriter has recruited artists for his latest music project 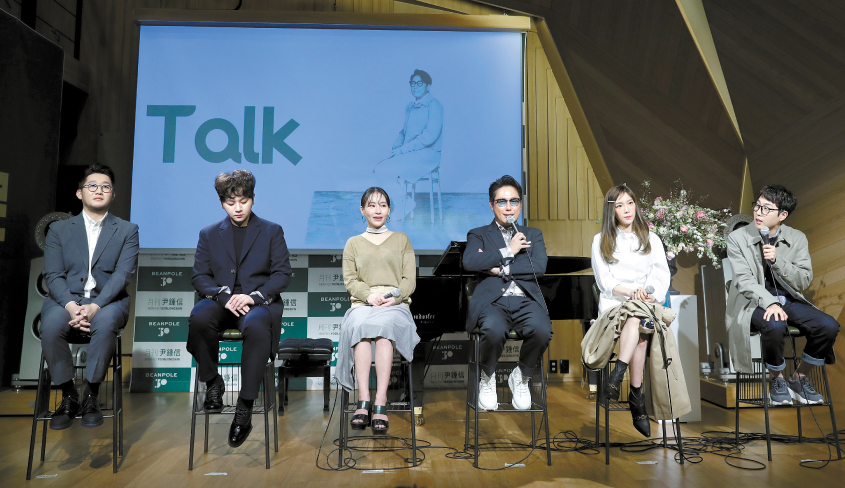 If becoming 20 years old is an exciting moment young people eagerly look forward to, reaching 30 is usually a cause for reflection. Having experienced the feelings of turning 30 earlier in his life and now entering the 30th year of his music career, 50-year-old singer-songwriter Yoon Jong-shin has a thing or two to say to those who are crossing that threshold, with his latest music project titled “hello 30.”

“The year 1989 was a year that was hard for me to believe was real,” Yoon told local press on Tuesday while talking about his new project. Yoon is also the head of an entertainment agency he founded called Mystic Story, though its original name was Mystic89, in order to mark the year that changed his life.

“I went on stage to sing at a university music competition for the first time [in 1989], and I was lucky enough to have been spotted by someone [in the music industry], signed by an agency and really started singing […]The things that happened and the people I met back then changed me.”

The project kicked off on Tuesday with the release of Yoon’s new single “Classy (hello 30),” a lively folk song he wrote for those who are nervous about turning 30. It will be followed by new songs throughout the spring - singer Jang Beom-june (lead singer of the band Busker Busker) in April, Taeyeon in May and trio Urban Zakapa in June.

Strictly speaking, the “hello 30” project isn’t solely a collaboration between Yoon and fashion brand Bean Pole, but it is also a collaboration between Monthly Yoon Jong Shin and the clothing company. Monthly Yoon Jong Shin is a multi-cultural platform that the singer launched in March 2010 that focuses on creating not just music, but also literature, films, photography and art. Although it is now common to simply release a digital single or digital EP without a hard-copy album, the idea of releasing a song online every month was quite novel when his project first began.

The three upcoming songs, as well as “Classy,” are also a part of the Monthly Yoon Jong Shin project. Although Yoon usually writes all of the songs that appear as part of the project, the three upcoming songs will all be rearranged versions of songs that were released in 1989: “After You Left” (translated) by Love and Peace for Jang, “Train to Chuncheon” (translated) by Kim Hyun-chul for Taeyeon and “A Pleasant Day” by Kim Wan-sun for the Urban Zakapa. But the songs are not the only things related to 1989, according to Yoon.

The producer intentionally chose singers who were born that year, which is the case for Jang, Taeyeon and Jo Hyun-ah of Urban Zakapa.

“I think that 30 is the age when you really start to ripen,” said Yoon. “When you’re younger, it’s all about your senses. You feel a lot of things and people like you for the things that you feel. But it’s from when you’re 30 that you really start thinking about what’s truly yours. It’s from that moment that you need to show what you really have. And what you do then will decide how you live in your 40s and 50s.”

His song “Classy” presents his advice to those who are about to enter that age. “Thirty, now I started seeing, I hope you’ll be as classy as you can,” read the lyrics. While it was all about being classy and strutting what you had in the ’90s, Yoon wishes that this generation of young people will take it down a notch and let a little air into their tight lives.

“This is not to say that you should spend money and dress well and get nice hair. What I mean is that, it’s OK to be a little slow. The ’90s were somewhat of a more relaxed time, so I understand the anxiety the young people have for their future. But I think that if you just let go of a thing or two, then that’s a beginning of how to be more classy,” said Yoon.

“I’m so moved that I want to write everything down,” said Taeyeon while listening to Yoon. In the beginning of the event the singer said that she felt confused about turning 30 recently on March 9. Taeyeon also recently released the song “Four Seasons” on March 24, which has been topping local charts ever since.

“I think I’m still in the process of finding out who I really am. I keep on changing depending on who I meet and what song I sing, which is why I’m not sure just exactly how I’m going to turn out […] I’m still going through chaotic times, but I think I’m on the path to finding my true self.”

Jang, who released “Every Moment With You” on March 21, also said he felt the need to start thinking about what he really likes instead of what others think. “I used to make the kind of music that people liked, and I thought that what others liked was what I liked. I felt so sure about myself before, but now I’m going to have to think about my music,” said Jang.

Kwon Soon-il of Urban Zakapa added, “It’s been 10 years since we debuted. And today made me think, ‘Could we really do this as long as Yoon Jong-shin has been?’ I think that he’s just so great, and we’re grateful to be a part of such a meaningful project.”

“Don’t look too far into the future,” said Yoon. “If you just look at what you have to do here and now, you’ll see one day that you’ve actually lived a lot of your days well.”