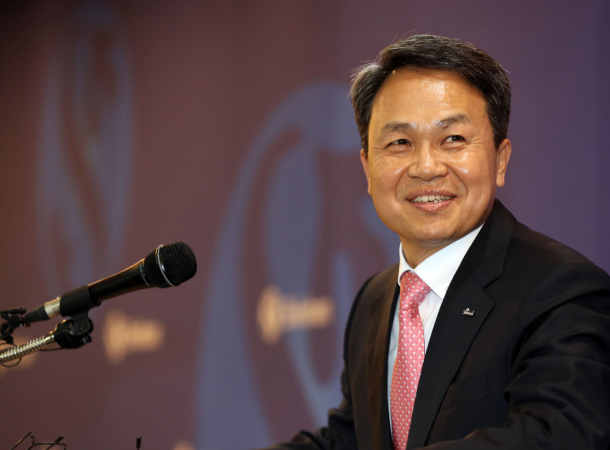 Jin Ok-dong, the new head, vowed to shift the bank’s recruitment process starting this year in a drive to bolster digitalization.

“To become a truly digital-focused company, we need to change the way we hire employees,” Jin told reporters after his inauguration.

“Until now, we largely selected candidates majoring in business and economics and trained them about technology,” he said. “But from now on, we will focus on recruiting graduates with majors related to IT and dispatch them to our branches.”

In Tuesday’s address, the new CEO also pledged to expand investments in digitalization and in infrastructure required for mobile and online banking. He declined to detail the total size of the commitment.

The global business strategy, he said, will be two-pronged. One element will be a push into emerging markets and the other will be a drive into established markets.

“We will solidify our standing in Vietnam, as Shinhan has seen great results there,” he said.

Advanced economies, like Japan and the United States, also are target markets as their currencies could provide liquidity during times of uncertainties. Jin himself has a career focused on overseas business. He spent 18 years at Shinhan’s Japanese branch.

Shinhan Financial Group reclaimed the top spot as the best-performing financial firm in 2018, backed by healthy profits from its overseas business and the relatively poor performance of archrival KB Financial Group.

Born in 1961, Jin graduated from Korea National Open University with a major in business and went on to earn a master’s degree at Chung-Ang University in business.