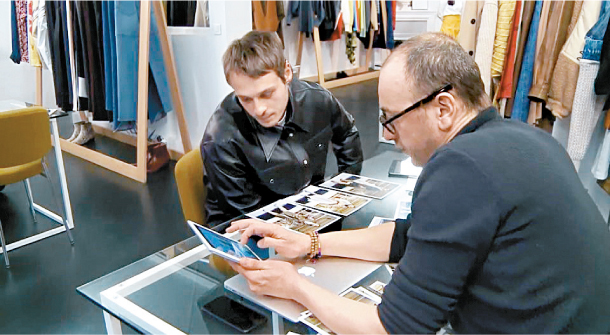 A showroom event in Paris showcased the fall and winter collection of System for women and System Homme in January. [HANDSOME]

Casual brands by Handsome, a fashion affiliate of Hyundai Department Store, are flying high in the United States and Europe.

Handsome announced Sunday that its two major brands - System and System Homme - signed contracts with 20 big-name fashion retailers from 11 countries after showcasing their fall and winter collections in an exclusive showroom event in Paris in January.

A showroom event is an exhibition held for fashion retailers.

Handsome added that it held a second round of showroom events from March 4 through 7. Since then, it has been consulting with 20 global fashion companies and retailers.

“The success largely comes from our unique design and materials that set us apart from other fashion brands, and we also owe a lot to Hallyu [the so-called Korean wave of cultural content] that is recently sweeping the world,” said a spokesperson from Handsome. “According to how local consumers react, we could also additionally export more of our products.”

Handsome adopted a predesign system this year to export products of System for women and System Homme.

Based on contracts signed, Handsome is planning to actively participate in global fashion weeks. The events that Handsome will take part in include the 2019 Fall and Winter Shanghai Fashion Week, held at the end of March, and the 2020 Spring and Summer Paris Fashion Week in June.