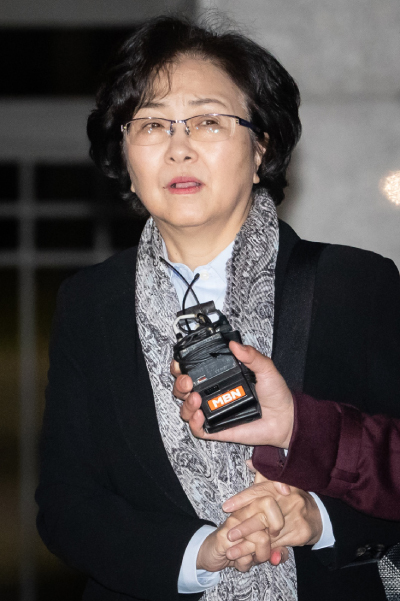 The Blue House welcomed Tuesday a court decision to reject the detention of a former minister accused of abusing her power to make political appointments.

“We respect the judge’s decision,” presidential spokesman Kim Eui-kyeom said in a statement after the Seoul Eastern District Court refused prosecutors’ request for a warrant to detain Kim Eun-kyung, who headed the Ministry of Environment from 2017 to 2018.

Kim is a suspect in a widening investigation of officials at public companies who were forced to step down to create vacancies for Moon associates. She was accused pushing executives out of their jobs and initiating inspections into those who refused to step down. The prosecution is investigating allegations that the Blue House was not only aware of the practice but also behind it.

“We expect the judiciary will set precedents on how far a minister can legitimately exercise his or her rights to make appointments and initiate inspections,” Kim said. “Taking the opportunity of this investigation by the prosecution, the Blue House of the Moon administration will also seriously think about ways to improve transparency of the appointment processes for heads and executives of public institutions.”

A Blue House official said Tuesday that the presidential spokesman’s statement earlier that day was brief but hinted at many things, such as muted criticism of the prosecution’s excessive investigative zeal. The Blue House and the ruling Democratic Party have complained that the prosecutors were going after Moon allies without probable cause.

After prosecutors sought a warrant to detain Kim, Yoon Young-chan, former senior public affairs secretary for Moon, posted a message on Facebook Monday criticizing them. Previous administrations purged officials who had been appointed by their predecessors, but the prosecution never investigated the practices, Yoon wrote. “Unless the law has changed, the prosecution should have used the same standards as in the past,” he wrote.

President Moon also made clear Monday his determination to reform the prosecution, one of the most powerful law enforcement authorities of the country. In a meeting with presidential aides, while Kim was attending her warrant hearing, Moon said a series of recent scandals showed that probes into the illicit activities of the privileged class had been conducted poorly due to outside pressure. He said the public is angry about cases that were fixed from on high in the past, adding that “the urgency of establishing a new investigative body for senior public servants was confirmed once again.”

A ruling party official told the JoongAng Ilbo Tuesday that the investigation of the appointments scandal at the Environment Ministry might have a different political purpose. He said the prosecutors initiated the probe to establish grounds for their own defense in the future. “The prosecutors may argue that the upcoming reform initiatives are Moon’s political revenge and resist them,” the official said.

In a book Moon co-authored in 2011, he described his own failed campaign to reform the prosecution. Moon, who served in top posts in the Roh Moo-hyun Blue House, recalled that the attempt to shut down the elite central investigation unit of the Supreme Prosecutors’ Office had failed after a probe into suspicions that Roh had received illegal presidential election funds. Moon said the reform initiative lost momentum because it was misunderstood as political revenge or an attempt to tame the prosecutors.

The main opposition Liberty Korea Party (LKP) criticized both the administration and the judiciary after the warrant hearing on Monday.

Na said it was unfortunate that the court used a different standard from a similar case at the Culture Ministry of the previous Park Geun-hye administration. Park, her former Chief of Staff Kim Ki-choon and Cho Yoon-sun, former culture minister, are currently standing trials on an allegation that they had created a blacklist of artists and TV celebrities critical of the administration and hurt them by cutting state funding to their projects and depriving them of media opportunities.