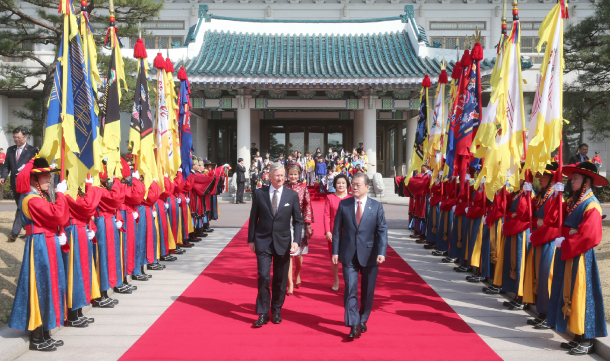 South Korean President Moon Jae-in and Belgium’s King Philippe agreed Tuesday during a bilateral summit at the Blue House to boost cooperation in the fields of chemistry and pharmaceuticals, and expand collaboration in biotechnology, artificial intelligence (AI), smart cities, start-ups and the fourth industrial revolution.

The Blue House announced in a press release that both leaders also decided to lend momentum to people-to-people exchanges through cooperation between both countries’ industrial and academic sectors.

Noting that Belgium was elected as a non-permanent member of the United Nations Security Council for 2019 and 2020, the Blue House said Moon conveyed his expectation that the European country play “a constructive role” during the period, and specifically asked King Philippe to accompany South Korea on its journey to build peace on the Korean Peninsula.

The Belgian king, according to the South’s presidential office, praised the efforts Moon and his government were making to bring about peace on the Korean Peninsula, and said Belgium was willing to support and cooperate with South Korea “unwaveringly.”

King Philippe, who arrived in Korea with his wife Queen Mathilde on a state visit Monday, was expected to participate in a state banquet yesterday night at the Blue House hosted by Moon. Moon’s office said some 90 people from all walks of life who contributed to strengthening Korea-Belgium ties were expected to join the dinner.

The king and queen of Belgium arrived in Korea with a delegation of over 200 people and were scheduled to stay through Thursday. This is the first time in 27 years that a Belgian king has visited Korea since King Baudouin did so in October 1992. It was also the first time that a royal figure from Europe visited South Korea on a state visit since Moon took office in May 2017.

Some highlights of the king’s visit to Korea were said to include a commemoration ceremony at Seoul National Cemetery in Dongjak District, southern Seoul, and the War Memorial of Korea in Yongsan District, central Seoul; a meeting with Korea’s National Assembly Speaker Moon Hee-sang and an opening ceremony for an exhibition with diplomatic archives on Belgium-Korea relations at the National Assembly in Yeouido, western Seoul; a ceremony at Seoul City Hall where King Philippe will be awarded honorary citizenship from the Seoul Metropolitan Government; investment and trade promotion events on life science and health care, smart cities, digital media, and the fourth industrial revolution and other subjects.