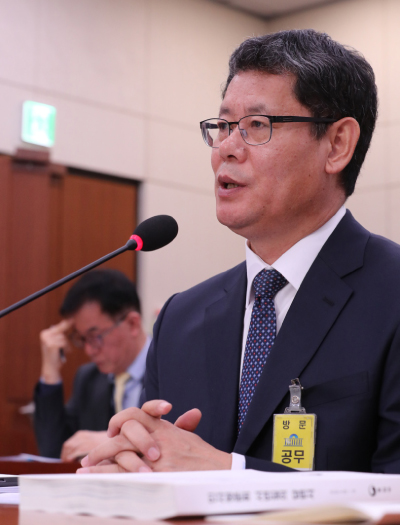 Kim Yeon-chul, the nominee for unification minister, speaks at his confirmation hearing at the National Assembly on Tuesday. [YONHAP]

Opposition lawmakers mounted an all-out offensive on the nominee for unification minister, Kim Yeon-chul, at his confirmation hearing at the National Assembly on Tuesday.

On trial at the hearing were Kim’s past attitude about North Korea, primarily regarding the 2008 killing of a South Korean tourist at the Mount Kumgang resort by a North Korean soldier - something that Kim had called a “necessary rite of passage” in a social media post.

Upon being accused by conservative lawmakers for acting like a spokesman for the North’s regime in social media comments, Kim apologized and said he believed North Korea was definitely behind the tourist’s death and the sinking of the Cheonan warship by a North Korean torpedo in 2010.

Between 2018 and early March, Kim was head of the Korea Institute for National Unification, a government-run think tank researching Korea unification.

In one post from March 2015, Kim openly derided President Moon Jae-in - who was a lawmaker at the time - for visiting a military base in uniform, saying he was putting on a publicity stunt that did not help the country’s national defense.

As expected from earlier reports on Kim’s nomination, controversial political comments he made on Facebook, in a number of interviews and in a book were subject to aggressive dressing down by opposition lawmakers.

“I can’t believe the words [you] put out to the world could come from an intellectual, a university professor,” said Rep. Chung Jin-suk of the main opposition Liberty Korea Party (LKP), who said he considered Kim’s psychological state abnormal.

“You’ve even cursed on social media, and [in my view] this foul language already disqualifies you as a cabinet member.”

Donning a grave look, Kim repeatedly said he regretted those past comments, though he tried to defend himself in some cases by saying the true meaning behind his comments was not properly delivered.

Ruling Democratic Party (DP) lawmakers expressed concerns about Kim but tried to veer the questioning toward current issues surrounding inter-Korean relations and the stagnant dialogue between the United States and North Korea.

When asked what ideas he had to help drive forward the denuclearization process, Kim said a Cooperative Threat Reduction (CTR) program could be considered as a solution.

The CTR program, better known as the Nunn-Lugar Act named after the co-authors of a bill in the U.S. Congress, provided funding and expertise to countries belonging to the former Soviet Union in exchange for the decommissioning of nuclear, biological and chemical stockpiles made during the Soviet era.

Kim also said that both North Korea and the international community would need to take measures before any economic cooperation could be undertaken by the Koreas, like the twin projects of the Kaesong Industrial Complex and Mount Kumgang tours.

“[Kaesong] would be affected by the North Korea-U.S. denuclearization negotiations, but the question of sanctions would need be solved [first],” he said.

“I have experience in participating in negotiations between South Korea and the United States back when the Kaesong Industrial Complex was first launched, and will work towards finding a solution through close talks with the United States.”

More notably, Kim also said that North Korea “cannot have both nuclear arms and the economy,” and that its recent desire to concentrate on the latter should be used to promote its denuclearization.

While opposition parties are unlikely to endorse Kim’s appointment as unification minister, cabinet members are not required to gain legislative approval.

Unless he steps down voluntarily, Moon could seat Kim as head of the government’s inter-Korean ministry regardless of these controversies.