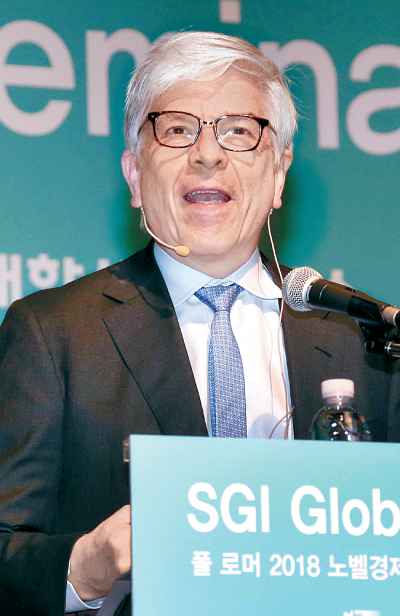 Paul Romer, winner of the 2018 Nobel Prize in economics, speaks at the Korea Chamber of Commerce and Industry in central Seoul. [KCCI]

Paul Romer, winner of the 2018 Nobel Prize for economics and a former chief economist at the World Bank, argues that, under certain conditions, raising the minimum wage could lead to permanently higher incomes and productivity. But under other conditions, when many are disconnected from the market, problems cannot be addressed with wage increases alone.

The New York University professor added that creating jobs is meaningless if these jobs don’t enhance the skills of workers.

“Minimum wages, we know, can lead to a reduction in demand for workers and then to a pool of workers who are not connected to the labor force,” Romer said on Wednesday in response to a question on his thoughts on the Moon Jae-in government’s income-led growth policy and the minimum wage increases.

Romer was in Seoul giving a talk on Korea’s economy and the inclusive policies. He was invited by the Korea Chamber of Commerce and Industry.

“The idea to force wages up then force productivity up has been tried in other places, and the track records are mixed at best,” Romer said.

Since the minimum wage was raised by double-digit percentages for two years running, which has been central to the Moon government’s income-led growth policy, Korea’s labor situation has been dismal.

Although the year-on-year increase in jobs in February was the highest since January last year, most of the jobs added last month are in the public sector.

Romer warns the government about creating “pretend jobs,” as that could do more harm than good.

“If you think of jobs as school, a job that teaches you terrible habits could damage you as a worker for the rest of your life,” Romer said. “So if it doesn’t accomplish anything, it destroys human capital. I would be very careful not to create pretend jobs.”

“I would be very careful about giving people money and saying ‘Sure, you can stay home and play video games,’” Romer said. “One of the problems of job guarantees is that you lose the incentive to make sure people actually do things they need to do.”

He noted especially the danger of the government subsidizing young people instead of motivating them to work.

Romer pointed out the need for a flexible job market. He said some economies were able to see a surge in their labor force due to a relatively flexible market.

“This was socially acceptable because it is easy to go get another job,” Romer said, citing the U.S. market. “This increasing flexibility in the labor market might be a way to create new employment opportunities.”

He said young people should realize that the job they have is not going to be the one they have for very long.

“Often people move around jobs early in their careers,” Romer said. “But you can only do that when you’ve got a labor regime where it’s easy to go from one job to another.”

He said that there should be no stigma associated with moving jobs very often.

Romer said he was surprised that women are so well educated in Korea but not active participants in the economy, adding that women should be more actively engaged.

The economics professor also talked about technology and how it affects jobs.

“Technology has always destroyed jobs,” Romer said. “Technology tends to destroy jobs for people with lower skills, and society has responded by making everybody require the skills that would be important in the new economy.”

He said this would mean a commitment to education. However, he said it wasn’t only about skills taught in school, but also about social skills that are acquired on the job.

“We can say that the answer in dealing with new technology is acquiring new skills,” Romer said.

“There are some constraints similar all over the world,” Romer said. “In terms of stabilization policies, just getting unemployment back down, monetary policy is extremely constrained everywhere in the world. We need economists and policymakers to think of other ways to stimulate the economy to get back to full employment quickly through the use of fiscal policy.”

He said the challenge here is very well understood.