NPS fails to stop Chey returning to SK’s board

NPS fails to stop Chey returning to SK’s board 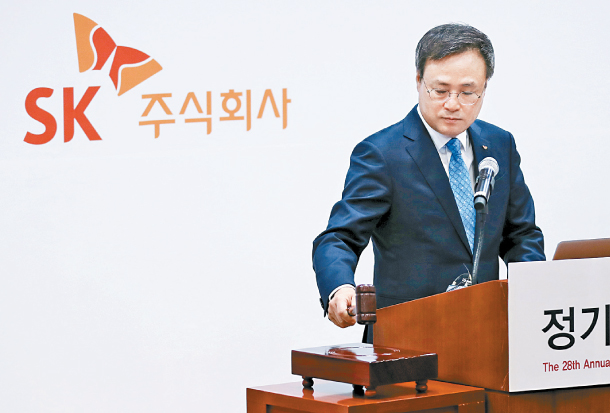 SK chief executive Chey Tae-won was reappointed as an internal director of the group’s holding unit SK Holdings at its annual general meeting held Wednesday in Seoul, despite disapproval from the country’s largest institutional investor, the National Pension Service (NPS), the previous day.

The pension fund had said it will vote against Chey’s re-election, citing his past record of hurting corporate value and shareholder interests, after a committee meeting held Tuesday. Chey, however, managed to retain his seat by earning majority approval among participating shareholders.

The NPS only has an 8.4 percent stake in SK Holdings, while Chey and people connected to him control 30.88 percent. According to an industry source, SK had enough shareholder votes secured prior to the meeting to secure its desired outcome regardless of the NPS, unlike Korean Air.

Korean Air CEO Cho Yang-ho lost his chairman title at the country’s largest airline Wednesday as the motion to re-elect him as an internal board director was opposed by more than one-third of participating shareholders.

Yeom Jae-ho, former president of Korea University, was appointed as outside director through the Wednesday meeting. NPS had also opposed this idea, citing a “conflict of interests.” Ties between Chey and Yeom are at the center of the controversy. The two graduated from the same high school and university. Despite the controversy, SK’s board chose Yeom as its new chairman following his appointment as outside director.

While traditionally the SK Holdings CEO has been chairman, the holding unit changed its bylaws during the Wednesday meeting so that the two positions could be separated. Following the change, Chey is no longer chairman and only keeps the CEO title.

SK said it expects the separation of the two roles to increase the board’s independence and improve the company’s corporate governance structure.