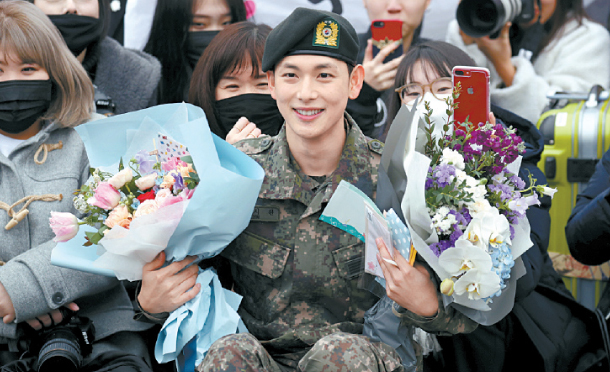 Singer-turned-actor Im Si-wan was discharged from his 21-month mandatory military duties on Wednesday morning, and he is eager to return to the small screen.

The 30-year-old actor greeted his fans and the press in front of the Army’s 25th division training center in Yangju, Gyeonggi. According to Yonhap News, around 100 fans from around the world were on hand waiting for him.

“I still cannot believe [that I’m discharged],” Im said. “I will only believe it after I wake up late tomorrow without having to hear an alarm.”

He added, “My friends, fellow soldiers and my officer were all a great support during my enlistment. I’m also thankful to my fans who waited for me. I’ve also met a lot with my senior colleague, Seol Kyung-gu, while I was out for break, and I received a lot of good comments and help.”

When asked about his most memorable experience while in the military, Im said that it was when he made bungeo-ppang (fish-shaped bread stuffed with red bean) and shared it with his fellow soldiers.

Im is set to return to the small screen in OCN’s upcoming thriller “Strangers from Hell” (translated) which is an adaptation of a web comic series that goes by the same title.

The series tells the story of Jong-u (Im), who meets strange people and faces mysterious circumstances after he moves into a small dormitory to concentrate on his studies.