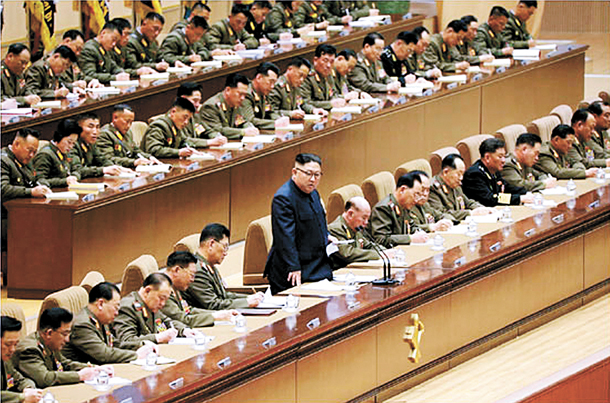 North Korean leader Kim Jong-un made his first public appearance in two weeks at a military conference on Monday, where he called for the strengthening of the country’s military forces, the North’s state media reported on Wednesday.

The Korean Central News Agency (KCNA), one of the regime’s official media outlets, reported that Kim made the opening and closing remarks at a two-day military conference of low-ranked military officers and political officials in Pyongyang from Monday to Tuesday in his first appearance since he took part in the country’s legislative elections on March 10.

In the interim, a number of events have indicated the North’s growing frustration over the stagnant denuclearization talks with the United States, such as threats made by Vice Foreign Minister Choe Son-hui on March 15 about suspending further talks with the United States and a withdrawal of North Korean officials from a joint liaison office with South Korea last week.

The North’s officials, however, returned to the inter-Korean liaison office on Monday after U.S. President Donald Trump publicly announced he had pre-emptively canceled further sanctions on North Korea. The low-level military officers’ conference was the first military-related ceremony Kim partook in since attending a concert to celebrate the founding of the North’s military on Feb. 8.

Analysts say Kim’s decision to speak at the conference suggests he has reached some sort of conclusion to weeks of deliberations following the collapsed summit with Trump in Vietnam last month and intends to ramp up his country’s military strength if negotiations with the United States and South Korea do not yield a compromise.

Backing this up are Kim’s calls to develop “the people’s army into an invincible elite army” in the face of a “developing revolution,” according to the English-language version of the KCNA report.

Amid such dialed-up militant rhetoric, further reflected in the tone of recent state propaganda, the North also appears to be hedging its bets in this protracted stalemate with the United States by seeking to expand ties with other countries, like Russia.

On Monday, the Kremlin announced that a state visit by Kim to Moscow is currently in the works, which would be his first trip to Russia since assuming power in 2011.

Kim’s chief lieutenant in charge of protocol, Kim Chang-son, was spotted at an airport in Moscow over the weekend after what is reported to be a six-day inspection of accommodations and facilities in Russia.

Experts say Kim could be seeking political and economic support from Russia to bolster its negotiating position in further talks with the United States, as well as reduce its dependence on China.

Ri Su-yong, in charge of international affairs in the North’s ruling party, was also spotted in Beijing on Wednesday for a stopover before taking off on a visit to Laos. His presence in China’s capital has been a subject of interest since the U.S. chief negotiator with North Korea, Special Representative Stephen Biegun, has also been in Beijing since Sunday to discuss the North’s denuclearization with Chinese Foreign Ministry officials.