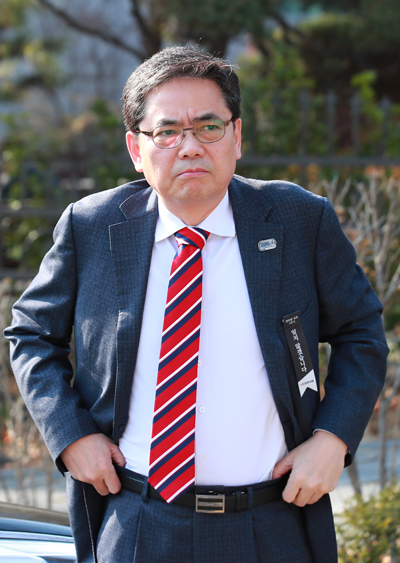 The Moon Jae-in administration’s decision to reinvestigate a sex scandal involving a deputy minister from the previous Park Geun-hye government has prompted fierce resistance from the main conservative opposition party, as one of its prominent lawmakers was named a primary target.

“I won’t succumb to the political investigation and political revenge,” said Rep. Kwak Sang-do of the Liberty Korea Party (LKP) on Tuesday, after a Justice Ministry’s special commission on Monday identified him as a suspect in an upcoming probe into former Vice Minister of Justice Kim Hak-eui’s 2013 sex-for-favors scandal. Kwak was a senior official of the Park Blue House at the time, and he was accused of having abused the power of his office to dismiss police and prosecution probes against Kim.

Kwak said the Moon government put a bull’s-eye on him because he has attacked the presidential daughter and her family over corruption allegations.

“But I will not give in,” he said. “I will ask the Board of Audit and Inspection to conduct a probe into the suspicious overseas relocation of Moon’s daughter.”

In recent months, he raised suspicions over the presidential daughter’s relocation to a foreign country and her husband’s employment. The LKP lawmaker said in January that Moon’s daughter and her family have relocated to Southeast Asia, raising suspicions that they had done so for the education of the president’s grandson. While admitting that they had moved overseas, the Blue House refused to offer other details and criticized Kwak for invading their privacy.

Kwak also criticized Moon for having defended the surviving family members of Kim Ji-tae, a well-known Japanese collaborator, during his days as a lawyer. In 1987, Moon served as an attorney for Kim’s family in a case where they reclaimed their assets. At the time, the family collected about 11.7 billion won ($10.3 million), Kwak said earlier this month. On Monday, a special commission under the Ministry of Justice recommended that the prosecution reopen a probe into suspicions that former Vice Minister of Justice Kim attended a number of parties in 2013 that were thrown by a contractor where women were hired to have sex with high-profile guests to gain business favors. That scandal evolved into a drug-and-rape case when a woman claimed that she was drugged, raped and videotaped by Kim and the contractor, Yun Jung-cheon.

Kim served in the second-highest post in the Justice Ministry for six days during the Park administration in March 2013 before he resigned over the allegations. An earlier police probe, however, failed to yield any charges against Kim.

In its recommendation, the commission made a rare move, stating that officials who served in the civil affairs office of the Park Blue House must be investigated over allegations that they pressured the police to dismiss the case. It said Kwak, senior presidential secretary for civil affairs at the time of the scandal, and Lee Joong-hee, presidential secretary for civil affairs, must be investigated over the suspicions.

After leaving the Park Blue House in August 2013, Kwak won a National Assembly seat in 2016 on the LKP ticket. Lee is currently working as a lawyer for Kim and Chang, one of the country’s largest law firms.

Speculation was once high that Kim would be investigated for aggravated rape charge, but the commission recommended a bribery investigation to the prosecutors. The prosecution already conducted two probes in the past on the aggravated rape charges against Kim, but the charge was dropped both times. In July 2015, a victim filed a petition with the court to challenge the prosecution’s decision to not indict Kim, but it was rejected. Unless enough new evidence for a retrial is discovered, reopening a probe into the same charge is blocked. As the reinvestigation will focus on the bribery charges against Kim instead of the alleged sex crimes, the prosecution now has new targets.

Kwak was accused of interfering with the police probe by conducting a reshuffle at the National Police Agency. Lee was accused of having sent a Blue House official to the National Forensic Service and demanding to see a video of the sex party that allegedly included Kim, as well as the outcome of the agency’s analysis.

Kwak said the allegations are groundless. “The political affairs office was responsible for the police reshuffle, and I had no appointment right,” he said, rejecting suspicions that he was the mastermind of the abrupt replacement of the National Police Agency chief in 2013. Kim was named the vice minister of justice on March 13, 2013 and stepped down from the post six days later on March 21 in the aftermath of the sex scandal.

While the police were conducting their primary investigation into the scandal, the chief of the National Police Agency was abruptly changed. Commissioner General Kim Ki-yong was replaced by Lee Sung-han on March 29, 2013, although Kim had 15 months left in his term. The replacement was a surprise, because Park made a presidential pledge to guarantee the tenure of the police chief to strengthen the authority’s political neutrality. After Lee became the new police chief, he conducted a major reshuffle of the police, and replaced all investigators on the Kim case and their upper chain of command in the following weeks.

Kwak also said it was outrageous that the Justice Ministry excluded Rep. Cho Eung-cheon of the ruling Democratic Party, who also served in the Park Blue House in 2013, from the renewed probe. Cho was in charge of the vetting process of Kim at the time.

Insiders from the legal community said the Justice Ministry’s fact-finding commission was too political.

“It is the investigative authority’s job to identify the targets of a probe,” said Kim Han-kyu, a former resident of the Seoul Bar Association. “But it is possible that the latest announcement will bring about misinterpretation that it was going after the LKP.”

A prosecutor-turned-lawyer also said it was unnecessary for the commission to name names.

“It seems like the ministry was issuing guidelines on how to conduct an investigation,” he said.

The Supreme Public Prosecutors Office is currently reviewing the recommendation to decide how it will proceed with a reinvestigation. Speculation is also running high that LKP Chairman Hwang Kyo-ahn, who was the justice minister six years ago, will be investigated, as ruling party politicians said Hwang should take responsibility for what happened in 2013. Legal insiders, however, said Hwang appears to have no link to Kim’s case.

Sources at the prosecution said Kim’s appointment was unusual to begin with. They said Kim stayed in the prosecution even after Chae Dong-wook, one of Kim’s classmates at the Judicial Research and Training Institute, was named prosecutor general.

“According to the culture of the prosecution, you will leave the organization when your classmate is named your chief,” a former prosecutor said. “But Kim stayed on and was later named the vice justice minister, so everyone thought it was offbeat.”

They also said Hwang would have not recommended Kim as the vice minister. Although Hwang started his prosecutorial career ahead of Kim, he was actually one year Kim’s junior when they attended Kyunggi High School. In Korean society, the hierarchy associated with high school alumni is considered tremendously important.

“If Hwang had any say in the appointment, he would not have named his high school senior as his deputy,” said a senior prosecutor.

Other officials who worked at the Park Blue House said Hwang was also not in the position to be involved in Kim’s appointment at the time.