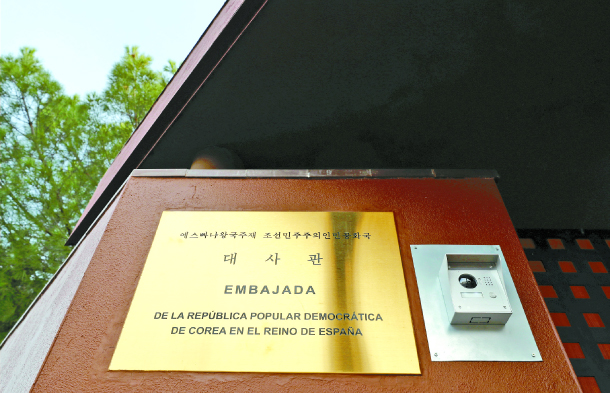 An anti-Pyongyang dissident group that raided the North Korean Embassy in Madrid last month may have had contact with U.S. intelligence agencies, according to a Spanish court Wednesday.

An investigation report by a Spanish High Court released by Judge Jose de la Mata said a group calling itself Free Joseon was responsible for a brazen infiltration of the North Korean Embassy in Madrid on Feb. 22 in which 10 assailants tied up staff and stole computers and cellphones before fleeing in two luxury vehicles owned by the embassy.

The incident took place only days before North Korean leader Kim Jong-un met U.S. President Donald Trump in Hanoi, Vietnam, on Feb. 27-28 and could have been an attempt to derail those talks.

The leader of the attack was believed to be Adrian Hong Chang, a Mexican citizen with residency in the United States, who was assisted by other members that included a South Korean citizen - identified as Ram Lee - and a U.S. national known as Sam Ryu.

The group, which formerly called itself Cheollima Civil Defense, claims to have established a provisional government that will take over when Kim Jong-un is overthrown for numerous human rights crimes. It also claims to be harboring Kim Han-sol, son of Kim Jong-un’s half-brother Kim Jong-nam, who was assassinated by North Korean-hired suspects at the Kuala Lumpur airport in 2017.

The court report on the raid detailed what apparently was a meticulously planned attack carried out over five hours. Armed with knifes, a machete and replicas of handguns, the group entered the embassy posing as businessmen attending a meeting with a North Korean official. Once inside, it threatened and violently beat several staff members and tied them up with handcuffs and cable ties.

The assailants openly told embassy workers they were part of a human rights group intent on liberating the North and tried to persuade them to abandon their loyalties to the Kim regime. One female worker managed to escape the embassy after jumping out a window, and a pedestrian called the police after witnessing her escape, the report read.

As Spanish police surrounded the compound, the assailants apparently left in three cars owned by the embassy, taking with them several pen drives, two computers, two hard drives and a cellphone. Adrian Hong fooled the police by pretending to be an embassy officer, saying nothing was out of the ordinary in the compound.

According to the report, the assailants made their way to Portugal, where they are believed to have boarded planes for Newark. Five days after the raid, Adrian Hong apparently tried to contact FBI officials in the United States to relay information about the incident.

Free Joseon claimed responsibility for the raid in a statement released on Wednesday, adding that the information they extracted from the embassy had “enormous potential value” and that the FBI had asked them to share it. Yet it also claimed the agency had compromised the terms of confidentiality that it agreed to, putting their members in danger.

The U.S. State Department on Wednesday denied the U.S. government had any links to the organization or sanctioned the attack.

According to NK News, an online media outlet focusing on North Korea, Adrian Hong Chang has been known in activist circles in the United States as the founder of LiNK, or Liberty in North Korea, a prominent human rights NGO that has branches in many universities across the United States, and as head of the Joseon Institute, which one Washington human rights activist said was a cover to prepare for the events that unfolded in Spain.

Neither Hong nor any of the other 10 alleged assailants have yet been apprehended, but the Spanish government has filed for an international arrest warrant for two suspects. If the U.S. grants Madrid’s request for their extradition, they could face up to 28 years in prison there, according to a Reuters report.

An earlier report on the incident by the leading Spanish daily, El Pais, alleged that the assault on the North’s embassy could be linked to the U.S. Central Intelligence Agency, citing sources in the Spanish spy agency. If U.S. involvement is proven, the report read, it could set off a diplomatic row between Madrid and Washington.

The North’s former interim ambassador to Britain, Thae Yong-ho, also one of the highest-ranking North Koreans to have defected to South Korea, wrote on his personal blog on Monday that he believes the group may have stolen, from the embassy in Spain, a computer containing a special encryption program used to decode covert messages exchanged between Pyongyang and its overseas embassies.

“If that computer got into the hands of the FBI, this is a serious issue for North Korea,” he wrote. “It will probably have to overhaul the entire system, eliminate all messages already sent abroad, and would be unable to communicate secretly with its overseas offices.”

Thae also raised the possibility that North Korea’s decision to recall its ambassadors in China, Russia and the UN on March 19 may be linked to such a leak.