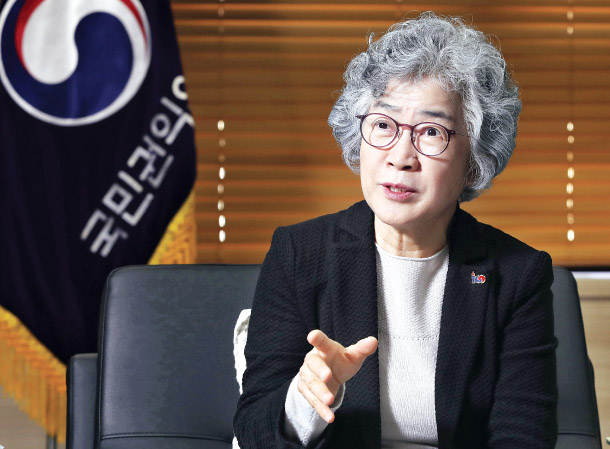 Pak Un Jong, chairperson of the Anti-Corruption & Civil Rights Commission, has an interview with the Korea JoongAng Daily in her office in Seoul on March 22. [PARK SANG-MOON]

On March 4, a local broadcaster reported that someone submitted chats that former Big Bang member Seungri, whose real name is Lee Seung-hyun, shared on his mobile messaging app KakaoTalk to the Anti-Corruption & Civil Rights Commission (ACRC). That person later told a radio show that the chats not only showed evidence of sex crimes, but also a “cozy relationship” between the entertainers, their business partners and high-level police officers.

The police asked the commission for the Kakao texts. It refused to surrender them - pointing to allegations that police colluded with the entertainers to cover up their crimes - and instead referred them to prosecutors on March 11.

The ACRC’s brave and principled response cheered the general public, some of whom have not even heard of the corruption watchdog.

Yet Pak Un Jong, chairperson of the 525-membered ACRC, humbly refuses to take any credit, let alone leak even the smallest new detail of the Kakao chats to the thirsty media.

A jurist with a passion for legal philosophy and human rights, Pak’s devotion to serve society’s most vulnerable is written on her business card - which features the Braille script. As the ACRC prepares to host the world’s largest anticorruption conference next year in Seoul, the Korea JoongAng Daily sat down with Pak last Friday at its Seoul Complaints Center in Seodaemun District, western Seoul, to hear how preparations are coming along, what impact the Seungri scandal has had on the ACRC and Korea’s latest score on the Corruption Perceptions Index.

Q. As chairperson of the ACRC, how did you feel when your organization was thrust into the spotlight during the Seungri scandal?

A. I think the experience has helped more people in Korean society gain a better understanding of whistle-blowers and blowing the whistle in general. I personally feel more responsibility now, and I think the ACRC has a lot of work to do to live up to the public’s expectations. The Act on the Protection of Public Interest Whistleblowers was enacted in 2011 and has since undergone several rounds of amendments, but in reality, whistle-blowers still live in psychological and physical pain.

Korea has been chosen to host the International Anti-Corruption Conference next year. What’s that about?

The international conference has been held every other year since 1983 to share experiences and information on anticorruption activities. It’s the largest single gathering on fighting corruption and attracts nearly 2,000 government officials and experts from civil society groups and international organizations from 140 countries. The 18th conference was held last year in Denmark and the 19th will be held next year in Korea, hosted by the Korean government, which is represented by the ACRC, and organized by the Berlin-based Transparency International and the International Anti-Corruption Conference Council.

What are the ACRC’s plans for the conference?

The International Anti-Corruption Conference Council has the final say in deciding the overall theme of the conference and the subjects that will be discussed in workshops, but several programs normally reflect the sociopolitical situations of the host country. The ACRC is planning to collect opinions from the Private-Public Consultative Council for Transparency Society - an internal group of members from the public and private sectors that discuss transparency issues - to decide what topics regarding Korea would best fit in the global meeting.

The ACRC will also try to attract attention from local companies and members of the general public by running a workshop on doing business with integrity, as well as holding cultural events with anticorruption themes such as movie festivals and music concerts. A team of young journalists chosen by the ACRC will be covering the events while, at the same time, conveying the message that anticorruption is not some serious topic only for grown-ups, but one that’s meaningful even to the youth.

The ACRC announced in January that Korea’s 2018 Corruption Perceptions Index, also known as the CPI, scored 57 out of 100. It was the highest grade Korea has ever received since the CPI was first measured in 1995. (The lower the number, the more corrupt the country is perceived to be. Based on this index, Transparency International ranks countries by the perceived levels of corruption in their respective public sectors, as determined by expert assessments and opinion surveys of businesspeople.)

The public’s high expectations and strong desire to fight corruption was a solid foundation for the Moon Jae-in government to try out new ways to eradicate corruption, like founding the Anti-Corruption Policy Consultative Council, which gathers the heads of relevant ministries for anticorruption policy discussions and is presided by the president; establishing the aforementioned Private-Public Consultative Council for Transparency Society; formulating a five-year anticorruption master plan; and actively responding to issues of corruption, such as hiring irregularities. I think these efforts helped Korea gain a higher CPI last year.

In global rankings, Korea’s CPI was six notches higher than in 2017 but still fell short by coming in 45th out of 180 countries around the world, and 30th out of 36 countries that make up the Organization for Economic Cooperation and Development (OECD). Why is Korea lagging so far behind?

But I’d like to point out that Korea still received positive feedback from the international community last year. For instance, the Political & Economic Risk Consultancy (PERC) wrote in a report in March 2018 that the ACRC has been effective at reducing the practice of unlawful solicitations and had a positive impact on reducing the problem of the leaking of public funds, such as welfare subsidies. PERC also pointed out that the ACRC has drawn up and enforced codes of conduct for officials and is in the process of strengthening the punishment and disciplinary measures for those who are found guilty of offenses. The Bertelsmann Foundation noted in a separate report in October 2018 that the Kim Young-ran Act, also known as the Improper Solicitation and Graft Act, which the ACRC drafted, had a positive impact on Korean society, citing survey results that show nearly nine out of 10 citizens responded that the law was effective.

The CPI is based on subjective assessments, so there’s a difference between that and the actual level of corruption in a country. In Korea’s case, I think people here tend to think the entire nation is corrupt whenever a large-scale power-abuse scandal erupts in which, say, prosecutors or figures in the judicial branch are involved. When ordinary members of a society feel no connection to suspects in a corruption case, they tend to feel worse about the case and what it says about the society overall. And I think the media plays some role in determining Korea’s CPI, because what other source would impact businesspeople or foreign analysts’ perception of Korea’s corruption as strongly as the news? Whenever the ACRC distributes press releases, it’s sad to see some media outlets focusing only on what they think is eye-catching instead of telling the readers the whole story.

A while ago, the ACRC announced plans to develop a corruption measurement index to comprehensively assess Korea’s integrity level in both the public and private sectors in various fields of society. It said the idea was based largely on growing demand from foreign countries seeking advice and know-how on measuring corruption. Are foreign countries really showing that much interest in Korea?

Many countries are showing interest in Korea’s tools to measure anticorruption, mostly developing nations like Indonesia, Malaysia, Thailand, Mongolia, Vietnam, Uzbekistan and Kuwait, who send their government officials to Korea so they can learn up-close how the measurement system actually works. I think Korea has set an example as a country that has grown vastly economically and one that has seen big improvements in crafting policies related to anticorruption and putting them into actual use.

When was your proudest moment as chairperson of ACRC since assuming the role in June 2017?

We have various duties here at the ACRC, and one of them is dealing with civil complaints. I feel the proudest when our members at the ACRC go out in the field and successfully play the role of mediator between conflicting parties. If a case goes to trial, there tends to be a winning side and a losing side. But there’s no losing side in a case that’s mediated. Both sides make some kind of concession, so both sides end up winning.