Women’s curling team now No. 2 in the world

Women’s curling team now No. 2 in the world

The Korean women’s curling team earned its highest-ever world ranking on Thursday after climbing up to second place. 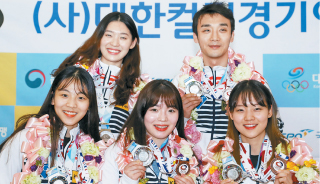 The Korean women’s curling team pose with their medals from the world championships and Winter Universiade at Incheon International Airport on Monday. [YONHAP]

Korea moved up four spots to finish second with 65.907 points in the latest women’s world rankings released by the World Curling Federation (WCF). Korea was behind Sweden, which amassed 81.569 points.

According to the WCF, this is the highest-ever position for a Pacific-Asia team in women’s world rankings that was first introduced in 2006.

The team, managed under Chuncheon City Hall, has been representing Korea since August after winning the national team selection competition. It has been posting good results this season by winning medals in World Cups. The team, coached by Lee Sung-jun, also won gold at the 2018 Pacific-Asia Curling Championships and took silver at the 2019 Winter Universiade.

Korea’s previous highest position in the women’s rankings was sixth place that was achieved by Team Kim, a silver medalist at the 2018 PyeongChang Winter Olympic Games.

Korea is one of three Asian women’s curling teams inside the top 10 in the latest world rankings. Japan was fifth with 56.520 points, while China was ninth with 40.147 points.