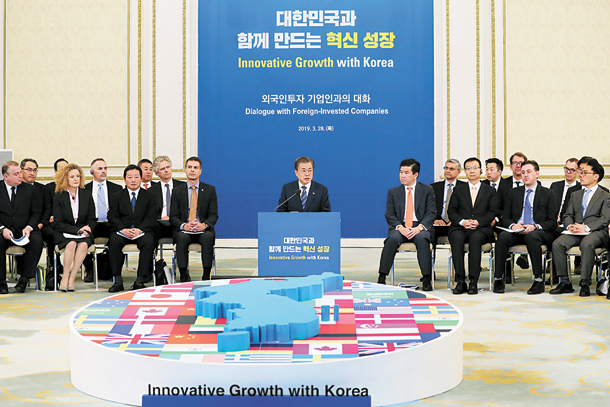 President Moon Jae-in, in a meeting with representatives of foreign businesses at the Blue House on Thursday, stressed that the “peace economy” on the peninsula will make Korea the most attractive market in the world.

“I hope you will pay attention to the infinite possibilities of a ‘peace economy,’” Moon said, adding that the local economy is broadly open to foreign investment.

He said since last year’s summit with North Korea, the geopolitical risks have dropped significantly.

“S&P, which is one of the world’s three credit rating institutions, has raised Korea’s sovereign ratings to the highest, higher than that of China and Japan,” Moon said. “Korea’s credit default swap (CDS) premium, which reflects the national default risk, has dropped sharply to its lowest level since October 2007, when last year it went up for many countries.”

This is the president’s fifth meeting with business leaders. He has held discussions with small and medium-sized enterprises, venture companies, conglomerates and the self-employed.

President Moon said foreign companies investing in Korea are “our” companies and contribute to the economic development of Korea.

“Your success is the Korean economy’s development,” Moon said. “We share the same destiny riding in the same boat.”

He praised the contribution foreign companies make to the country, generating 19 percent of Korea’s exports and employing 7 percent of the workforce.

“While globally foreign investment has fallen 19 percent due to the slowing global economy, we have seen a 17 percent increase, which is a valuable achievement,” Moon said.

He stressed government efforts in lifting regulations and spending in supporting foreign investments.

“Starting this year, we are introducing a regulatory sandbox system whereby innovative products can easily be tested and launched,” Moon said. “Already 17 cases have been approved and are awaiting investment.”

He said the government has significantly raised the budget for providing incentives to foreign investors committed to new technologies.

Last year, the government provided incentives in the form of tax benefits to foreign companies investing in 157 new technologies. A total of 6 billion won ($5.2 million) was committed. The government has increased that budget to 50 billion won and has widened the number of technologies qualified to 2,769. The biggest change is that this support will now be in the form of cash.

The attendees welcomed the Moon administration’s efforts and promised support in strengthening cooperation with their own countries.

James Kim, president of Amcham Korea, said Korea provides a good business environment. He said he felt positive energy when he visited the Blue House with President Donald Trump. European Chamber of Commerce in Korea Chairman Dimitris Psillakis said 84 percent of European companies consider Korea as an important partner. However, he said doing business in Korea is still a challenge.

He said flexibility and security should be guaranteed.

Tomoyuki Moriyama, head of the Japanese business group Seoul Japan Club, raised concerns regarding the deteriorating relationship between the two countries despite the growing economic ties, noting that the bilateral trade for the first time exceeded $10 million last year. He said it would be best not only for both Korea and Japan but also for Asia and the world if the two countries maintain a friendly relationship. Moriyama also raised the issue of worsening fine dust pollution.

He said while Korea is an attractive investment site, the air pollution is becoming an obstacle. He requested that the Korean government act swiftly.