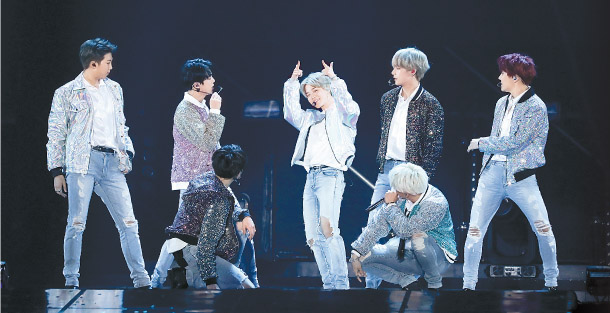 When boy band Exo made its debut in 2012, what took most people by surprise wasn’t the members’ sharp looks, their powerful music or their superb dance skills - it was their unique and rather peculiar concept. The 12 members (three have since left the group) introduced themselves to the world as aliens from exoplanets who had lost their memories after landing on Earth.

Each member was endowed with a special superpower, ranging from teleportation and telekinesis, to controlling time, water and thunder.

The music video for the group’s debut song “MAMA” (2012) begins with a narration that gives an explanation to how the group was divided into Exo-K (Korean unit) and Exo-M (Chinese unit) as if living in a parallel universe, and each member was paired with a counterpart in the corresponding group.

“When the sky and the ground was one, the legends through their 12 forces nurtured the tree of life,” starts the narration, which sounds more like the opening chapter of a fantasy novel than the introduction of a K-pop boy band.

“To think they were once labelled ‘SM’s Biggest Flop’ […] They went through a lot to become one of the most successful groups in K-pop,” reads one comment on YouTube, recalling when the group’s never-before-seen concept took K-pop fans by surprise. The group was frequently mocked, and the members were often asked by reporters and other celebrities to show off their superpowers - to which they would wittily reply, “We can’t use our powers on Earth.”

But in many ways the group’s far-out concept was ahead of its time. Since then, an increasing number of K-pop groups has entered the industry with their own unique background stories, giving each member a distinct personality. While concepts have long been an essential part of the appeal of K-pop, Exo was the first to take its concept to the next level and derive an entire universe from it. Boy bands like BTS and Monsta X, and girl groups like WJSN and Dreamcatcher followed in Exo’s footsteps and created their own distinct origin stories to capture the imaginations of fans and create a world for themselves outside of music.

The web comic, titled “Save Me,” below, explains the details of the BTS Universe, which has only been hinted at in the group’s music videos and not explained in full until now. [SCREEN CAPTURE]

Korean entertainment companies have long understood that bestowing each member of their groups with distinct characteristics or personalities is a way of drawing interest and connecting with fans. Veteran boy band H.O.T., which dominated local music charts in the late ’90s, assigned common archetypes found in boy bands all around the world to each of their members. Heejun was the “Witty One,” Kangta was the “Sexy One,” Tony was the “Moody One,” Woohyuk was the “Wild One” and Jaewon was known as the “Shy One.” They were also each given their own color to help them stand out.

Later groups were quick to employ distinct concepts to help them stand out from the ever-growing crowd of K-pop groups. Boy band TVXQ, whose name means “Rising God of the East,” and first-generation girl group Fin.K.L. were all about empowering young people to break free from the norms of Korea’s conservative society.

Exo’s creation of a backstory and a universe was the next step in the evolution of K-pop group concepts and it enabled fans to further immerse themselves in the music and content created by the group.

“It was meant to help fans engage more deeply with the music,” said a representative from SM Entertainment. “We started by giving them each an individual character and personality that matched their story, which helped make each member more appealing. We started it so that the story might develop in the future just as each of the members grew, and at the same time stir the fans’ imaginations about what would happen with each change.”

Other acts have since come up with their own overarching concepts, as seen in Monsta X’s use of the seven deadly sins in their music videos and girl group Dreamcatcher’s elaborate backstory involving nightmares. Each of their new songs and music videos has remained faithful to the concepts, like episodes from a single story.

Members of boy band Exo, left, were each given super powers when they made their debut in 2012, right. [ILGAN SPORTS, SM ENTERTAINMENT]

Thousands of fans of K-pop megastar BTS, who call themselves ARMY, have taken to the comment section on Naver’s web comic series “Save Me: The Most Beautiful Moment in Life,” a collaboration between the group’s agency Big Hit Entertainment and cartoonist Lico. The fans have lively discussions about where they think the story will unfold in the next episode.

The comic series, which shares a name with the group’s two-part EP series “Save Me,” began on Jan. 17 to provide a look into what fans refer to as BU - the BTS Universe.

Now in its 12th episode, the web comic explains unanswered questions from many of the band’s music videos. The stories detail why Jin was seen jumping into the sea and why Suga was seen lying in the middle of a room on fire. Also available for purchase online is “The Notes” book series, which contains first-hand accounts by the boys inside the BTS Universe.

Many K-pop groups now employ overarching concepts, such as girl group Dreamcatcher, left, whose members are said to control people’s nightmares. Boy band Monsta X, center, uses the theme of the seven deadly sins in each of its music videos. Each member of the girl group WJSN, right, is assigned one of the 12 zodiac signs to represent them. [ILGAN SPORTS, CJ ENM]

The reason why the latest generation of groups are debuting with more developed story lines than before is because the methods in which fans consume K-pop goods has expanded over the years, according to pop music critic SeoJeongMinGap.

“It’s a method of getting more content out of the groups,” he said. “While artists usually communicate through their work, the work of K-pop groups is not just limited to their music. They also communicate with their fans through other means and come up with cultural content for them as well. So by making the members themselves a part of their content, they’re creating a fantasy for the fans to engage with, in which reality and fiction are mixed.”

Not only does a separate universe provide more content, it can actually be a solution to keeping overly-zealous fans from infringing too far into the celebrities’ private lives, according to K-pop critic Mimyo.

“Having a separate identity that the fans can relate to may decrease their urge to want to know more of the stars’ private lives, which has long been a big problem in the K-pop industry. If the agencies can properly come up with a story to intrigue fans, then they might be satisfied with taking in just that instead of wanting to intrude into the stars’ real lives,” he said.