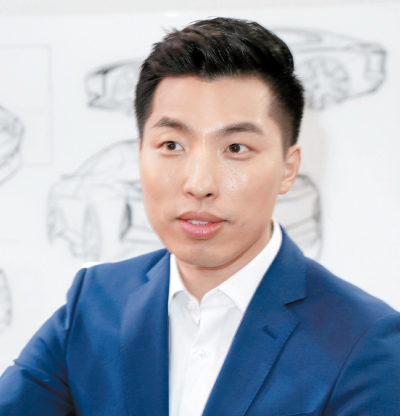 GOYANG, Gyeonggi - As the auto industry heads toward a paradigm shift of electrification and automation, BMW is redefining its design to transition from the “ultimate driving machine” to the “ultimate driver.”

Sharing his decade of experience at the company during an interview on Thursday at the Seoul Motor Show, BMW Group exterior designer Lim Seung-mo discussed the future of design at BMW.

As one of six Korean designers at BMW Group, Lim is behind numerous vehicles, most notably the M5 F90 performance sedan and the i Vision Dynamics electric concept.

Pointing at the automaker’s concept electric vehicle, Lim emphasized that the change in the group’s vision, through the incorporation of new technology, has heavily influenced his design decisions such as BMW’s signature “kidney grille.”

“For the i Vision Dynamics, the kidney grille is fitted with what we call an ‘intelligent surface’ with radars and sensors in the back,” said Lim.

Unlike the conventional BMW with air-vent kidney grilles, the concept vehicle only shows the outline of the grille, with the surface the same color as the body.

“In the past, vehicles focused on cooling based on the drive train,” explained Lim. “However, with the paradigm shift through automation, connectivity and digitalization in the future, the kidney grille’s design has changed to adopt a new role.”

The new uniform design language to harness new technology also extends throughout the vehicle, with the glass flush to the car’s body.

Based on the electric concept designed by Lim, first unveiled two years ago, BMW will launch an all-electric car, the i4, in 2021.

Lim, who started his design career at BMW as an intern in 2009 after studying abroad in Germany, added that despite the changes, the brand’s look will not be lost and that his role is to build on to the iconic design, highlighting the BMW grille as a “gift.”

“With the [grille] as a pivot, we can strengthen the design and create a look that is more unique to BMW,” said the designer. “For designers, the kidney grille is an opportunity and a gift that begs to be utilized.”

To create such new designs, Lim added that he draws inspiration from books on technology.

“I have recently become interested in books that deal with science and technology in the future,” said Lim. “I think of applying new future technology that I read into cars and connect it to design.”

As for tips to the younger generation of designers in Korea, Lim emphasized the importance of combining talent and passion.

“I think they should strive to harmonize what they like and what they are good at,” advised Lim, who decided to study and work in Germany after seeing an M5 during his university years. “It will take a while but I think it’s the way to a sustainable result.”