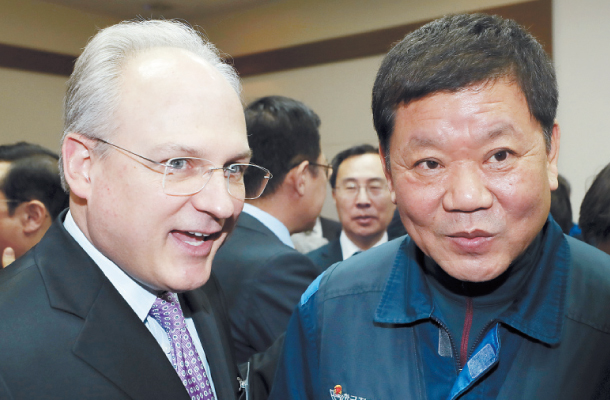 General Motors (GM) opened its Asia-Pacific Headquarters in Korea on Thursday, highlighting the automaker’s commitment to the country.

The U.S. automaker held a ceremony Thursday at GM Korea’s main office, located at its Bupyeong plant in Incheon, to celebrate the establishment of the Asia Pacific Regional Headquarters, which will manage GM’s production, sales, marketing and finances for the region except China.

GM International previously had a regional headquarters in Singapore.

“Since last year, we have made significant progress to fulfill our promises,” Engle said. “We are establishing the Asia-Pacific Headquarters here to utilize Korea as the core of our business efforts in the region.”

The opening of the new regional headquarters indicates that GM is not giving up its presence in Korea, Engle said. The Korean government and GM signed an initial agreement in May last year to open the office amid speculation that the Detroit automaker was going to withdraw its operations from Korea due to low sales and its struggle with the labor union.

GM has hired 100 new engineers for research efforts while increasing investment in its Bupyeong plant to develop and build more sports-utility vehicles and cross utility vehicles.

GM Korea also cut the prices of its mainstay models - including the Impala sedan, Trax compact SUV and the Equinox SUV - by up to 3 million won in January. The carmaker plans to introduce 15 vehicles into the local market over the next five years.