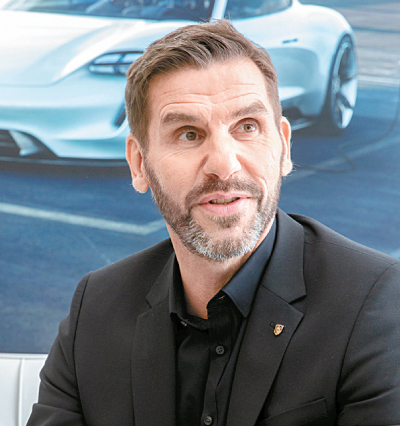 GOYANG, Gyeonggi - Porsche Korea enjoyed a successful year last year, breaking its past sales records and selling 4,285 cars in the local market, 53.6 percent up on year.

The recent success, however, tells just half the story of the luxury brand’s success under Michael Kirsch, who started heading the Korean subsidiary of the German luxury car brand in 2016.

Then, the Seoul subsidiary was faced with multiple hardships due to its involvement in manipulating certification documents and a larger emissions-rigging scandal of the Volkswagen Group it is a part of. The company admitted its error in the document forging scandal.

“When I came here almost three years ago, we had to undergo a reset of the company,” Kirsch said as he sat down for an interview with the Korea JoongAng Daily on the sidelines of the Seoul Motor Show press day event held Thursday. “So the first thing we did is to investigate what we personally did wrong then … [tell] the authorities what we did wrong and we took responsibility.”

The carmaker was fined 1.7 billion won ($1.5 million) by the Ministry of Environment and a related trial is still going on, but a company spokesperson said it will accept the results as it is willing to take responsibility.

Acknowledging the situation, Kirsch described last year’s success using a Korean saying, the ground becomes more solid after heavy rain. He said he would like to stay humble because good times can always end tomorrow.

Kirsch, at the same time, admitted "sometimes it is difficult to understand what is requested" by the Korean authorities as rules are often different with other markets.

For the time being, though, the managing director said sales records in the first three months of this year are “very promising” and cautiously summed up his goal as selling one more car than last year, which would still be a record sales result for the Korean unit.

This year, the company has already released the third-generation Cayenne in the Korean market, and later this year it plans to roll out the new Porsche 911 Carrera 4S and facelifted Macan compact sport utility vehicle. The new models could boost sales for the luxury brand.

While the global launch of the carmaker’s first all-electric Taycan is scheduled for September, Kirsch said the car will come to Korea in the first half of next year and said the company is “heavily investing in infrastructure,” especially direct current (DC) fast chargers that charge cars faster than common chargers.

Kirsch said the Taycan will be able to move 500 kilometers (311 miles) after just 20 minutes of charging, which is not a long time.

Kirsch expressed hopes that, as the “world now commits to electric mobility,” the Korean authorities could help drive the push for electric vehicles while embracing other green energy sources.