Seoul Motor Show gets ready for age of ‘eco-necessity’

Seoul Motor Show gets ready for age of ‘eco-necessity’ 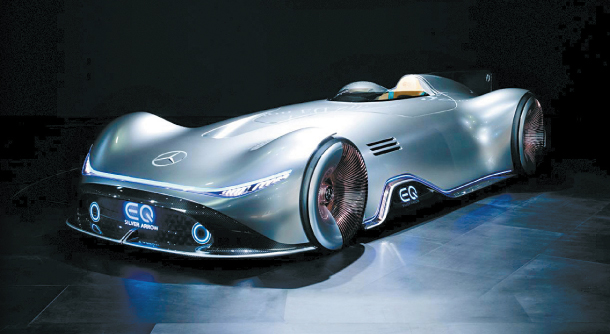 GOYANG, Gyeonggi - This year’s Seoul Motor Show, which officially kicks off today, is focusing on green cars as sustainability becomes a key issue in the global auto industry, especially in Seoul where the sky has been gray with dust for months now.

The committee for the biennial event opened the exhibition to reporters on Thursday, a day prior to opening, to offer a peek into the exhibitions from a total of 227 participating companies.

Automakers from home and abroad headed to the motor show to show off their own approach to solving environmental issues linked with cars. While the spotlight was mostly on electric vehicles (EVs) and hybrids, new concept cars and the latest SUVs were also on display.

The carmaker unveiled the hybrid version of the mid-sized sedan - a version that has not yet been launched. The hybrid model comes with a so-called solar roof.

“Through solar panels on the roof, it produces power and charges the battery not only during daytime driving but also when it is stopped,” said Lee Kwang-guk, executive vice president of Hyundai Motor, during a press event held Thursday.

While not a completely new technology overseas, its implementation is the first in Korea. The automaker claims that the tech will allow the sedan to drive further.

“By using the energy created from the solar roof, it’s possible to drive around 1,300 kilometers [808 miles] a year,” added Lee.

Hyundai Motor also said it has ramped up the fuel efficiency of the hybrid Sonata from its previous-generation hybrid by 10 percent, adding that it is aiming to reach an efficiency of 20 kilometers per liter (47 miles per gallon) with the latest hybrid expected to roll out on the Korean market in June this year.

“With the worsening levels of fine dust recently, interest in hybrids has been growing,” said Lee Byung-jin, managing director at Lexus Korea. “While it was good to be eco-friendly before, we have now reached the age of eco-necessity.”

Hybrid vehicles made up 94 percent of the automaker’s sales last year in Korea.

The eco-friendly theme also extends to the German automakers.

Mercedes-Benz unveiled its Vision EQ Silver Arrow electric concept car for the first time in Asia at the show on Thursday and will also display its all-electric car, the EQC throughout the show.

BMW is also featuring its electric concept at the show through “i Vision Dynamics,” emphasizing the automaker’s move toward an electric future.

Prior to unveiling a series of new vehicles for the Korean market such as the new X7, BMW Group board member Pieter Nota apologized for the series of recalls last year after numerous BMW vehicle’s burst into flames.

From left: Luc Donckerwolke, Kia Motors’ executive design vice president, introduces the concept SP Signature. The SsangYong Motor Korando is displayed. Renault introduces the EZ-PRO, a next-generation robot-vehicle that could be used as a delivery truck or a food truck. These vehicles are on display at the Seoul Motor Show at Kintex in Goyang, Gyeonggi. [YONHAP]

“We are truly sorry for the current concern and inconvenience that some of our vehicles have recently caused,” said Nota, making a slight bow. “We are deeply committed to do[ing] everything we can to regain the trust of our customers here in Korea.”

Tesla, which made its first appearance at the event, unveiled its long-awaited budget electric car Model 3 along with the Model S and Model X for the first time in Korea. A spokesperson for Tesla said local deliveries of the Model 3 are expected to start from the fourth quarter this year. It has been roughly three years since the carmaker started getting preorders for the car in 2016, and local fans’ patience has been growing thin.

“The fourth quarter is our goal at the moment, but there can be changes,” the spokesperson said, being cautious of potential delays. The press officer added that the delivery will be made in the order of final order confirmations, the step after preorders.

While it is rare for Tesla to exhibit at motor shows in general, the press officer said, “It is a rare occasion, but Tesla decided to join as the focus of this year’s event on green cars met well with the vision of Tesla.”

Apart from eco-friendly vehicles, many SUVs were unveiled at the event as the SUV market continues to grow.

A muscular diesel-powered Mohave SUV modeled off the unveiled concept will launch in the local market by the latter half of this year, according to the automaker. The SP Signature, a concept for a small luxury SUV, is also preparing to launch in the second half of the year. Kwon Hyug-ho, head of local sales for Kia, said the company hopes to become an SUV specialist with this strengthened lineup.

Renault Samsung Motors unveiled its XM3 Inspire show-car at the event. The company’s CEO Dominique Signora said the crossover SUV, which has the look of both a sedan and SUV, will be produced in the carmaker’s Busan factory during Thursday’s briefing. When asked if the XM3 succeeds the existing SM3 sedan, he said, “It’s a completely new model … and the first crossover SUV from Renault Samsung Motors.”

The company said customers will be able to see the Busan-made XM3 Inspire by the first half of 2020.

GM Korea unveiled the large SUV Traverse and pick-up truck Colorado and said they will be released in the local market in the second half of the year. The large SUV is expected to battle with Hyundai Motor’s recently-released Palisade large SUV.

SsangYong Motor focused on introducing its latest Korando, which rolled out last month. Instead of elaborating on car specs, the company laid out its future vision related to SUVs. SsangYong does not have any EV or hybrid models yet.

The motor show will run through April 7 with a total of 39 cars introduced for the first time in Korea under the theme “Sustainable. Connected. Mobility.” As well as the exhibition, test-drives of electric cars and autonomous shuttles are also being offered during the event so that visitors can get a feel of futuristic mobility.