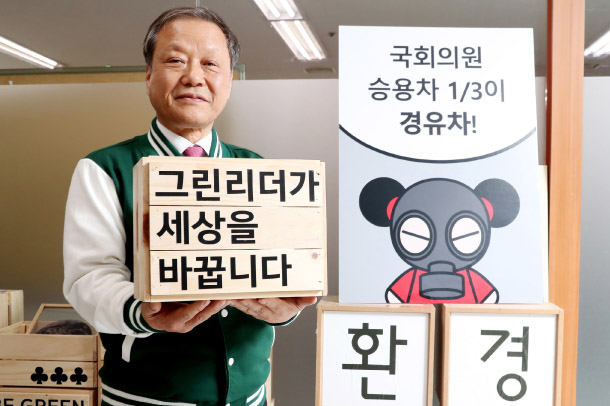 Choi Yul is the president of Korea Green Foundation, the first group to sue the government over the worsening fine dust problem. Choi says the government needs to focus on curbing roadside emissions first and support the nationwide transformation from reliance on diesel-fueled vehicles to more environmentally friendly cars.

“If the government does not act on diesel-fueled cars just because they are more affordable to people, then we may as well all end up dead or sick with fine dust-induced illnesses,” Choi told the JoongAng Ilbo recently. “The government should work on providing small businesses with electric vehicles or gasoline-fueled vehicles.”

For faster results, Choi suggested expanding the current policy that bans half of all public officials’ vehicles from the roads on especially dusty days to all people. Korea passed a special law on fine dust reduction on Feb. 15 that involves taking cars off the road, especially old diesel-fueled vehicles and half of public officials’ vehicles, and temporarily halting operations of local coal power plants.

“The special law states that when PM2.5 level hits more than 76 micrograms for two days in a row, the local governments ‘can’ ban half of public officials’ cars off the road, but it should be changed to ‘must,’ said Choi. “On especially dusty days, schools must call off classes. And on those days, parents with young children must be allowed to work from home.”

Although Korea has seen rising levels of fine dust for several years, this year and last year have been the worst. The daily average level of PM2.5 particles broke the record in Seoul on March 5, hitting 135 micrograms, the highest since 2015, when data was first recorded. The second-highest level was on Jan. 14, when the average PM2.5 level in Seoul reached 129 micrograms.

The Korea Green Foundation in May 2017 sued the governments of Korea and China to demand compensation of 3 million won ($2,639) per victim of Korea’s worsening fine dust problem. The lawsuit has 91 plaintiffs. The next hearing is scheduled for April 19.

While preparing for the suit, Choi spoke to the JoongAng Ilbo on March 19 about what he thinks the Korean government should be doing differently to reduce fine dust.

Q. Shortly after the enactment of the special law to reduce fine dust on Feb. 15, the fine dust concentration in Korea hit a record level. How do you assess the government response then?

A. The government responded in an indecisive manner. If citizens complain that it is hard to breathe due to fine dust, the most immediate solution would be banning half the vehicles from the roads. The effects would be seen immediately if half of the cars are off the road. On especially dusty days, schools must call off classes. And on those days, parents with young children must be allowed to work from home.

How do you assess the application of the special law by local governments to reduce fine dust?

The special law states that when the PM2.5 level hits more than 76 micrograms for two days in a row, the local governments “can” ban half of public officials’ cars off the road, but it should be changed to “must.” Additionally, citizens from Gyeonggi and Incheon are more reluctant to cooperate since their public transportation system is less convenient. In order for Seoul, Incheon and Gyeonggi to cooperate wholly with the policy, the recently launched joint transportation committee of Seoul, Incheon and Gyeonggi should play a role here. Seoul Mayor Park Won-soon also needs to take the lead in this matter.

Is it possible to reduce fine dust while keeping diesel-fueled cars on the road?

Letting people drive diesel-fueled cars and promising cleaner air is nothing but a fake pledge by a politician who just wants to win support and votes. The government must be responsible for the citizens’ health, livelihood and safety. But it has so far not been on this issue. So how can the people trust the government? Realizing the mounting public pressure on the government to deliver, it has recently put out the random policy of artificial rain.

How feasible and effective do you think the Korean government’s recent proposals to work with China on artificial rain and, separately, to install giant air purifiers on rooftops are?

There’s no point to these projects. You have to focus on the sources of air pollutants — and they are coal plants and vehicle emissions. You have to get to them before the pollutants are in the air. Using chemicals to reduce pollutants that are already in the air sounds pretty ineffective to me.

Do you think President Moon Jae-in will be able to deliver on his pledge to reduce fine dust by 30 percent?

I think he’s doing his best, but there has not been an improvement. What makes it difficult foremost is that there has been no precise measurement of the amount of fine dust produced domestically.

Critics say that phasing out nuclear power plants is at odds with the policy of reducing fine dust.

What about the argument that banning the use of diesel-fueled cars, which tend to be cheaper, is a discriminatory policy against those who cannot afford other cars?

If the government does not act upon diesel-fueled cars just because they are more affordable to people, then we may as well all end up dead or sick with fine dust-induced illnesses. The government should work on providing small businesses with electric vehicles or gasoline-fueled vehicles.

Can’t we take the fine dust disaster as an opportunity to build a new business?

Even though it has been proven through studies that emissions from China influence the region’s fine dust levels, it refuses to disclose its fine dust data and seems to evade international responsibility.

We need to admit the fact that some of Korea’s industries that produce air pollutants have moved to China, partly contributing to the level of emissions in the country.

Rather than blaming China without any reason, we need to work together to reduce fine dust, since the Chinese are the primary victims and the Koreans secondary. We need to learn from Europe, which created long-running transboundary air pollution convention treaties.

How long of a mission are we seeing in tackling fine dust?

It would take over a decade to solve the fine dust problem. The industry structure of Korea should completely change. Korea ranked in eighth place in its emissions of greenhouse gases last year.