Deaths will outnumber births in Korea starting this year

Deaths will outnumber births in Korea starting this year 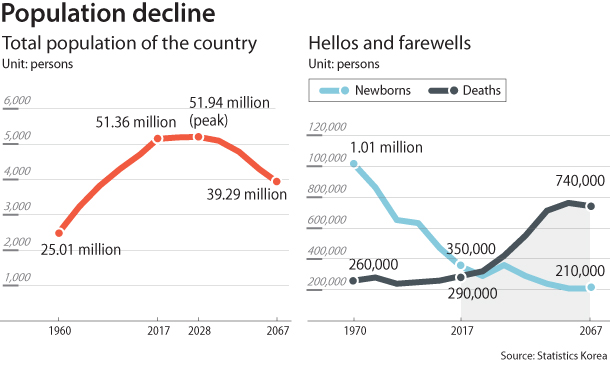 Deaths will be more frequent than births in Korea starting this year.

Korea total population is not yet declining - but that is expected in less than a decade.

“From 2019, Korea will have more deaths than births,” Statistics Korea said in a statement Thursday. “The total population, counting also foreign residents in Korea, was around 51.36 million as of 2017. It will peak at 51.94 million in 2028. After that, it will decline, hitting some 39.29 million in 2067. By that year, the population growth rate will be around negative 1.26 percent.”

South Korea has the lowest fertility rate among OECD member countries. Its fertility rate, or the average number of babies that a woman is expected to have during her lifetime, fell to 0.95 in 2018.

Statistics Korea said the population will not decline starting this year because of people coming from abroad, including foreign students and international marriages.

Of particular concern is a decline in the working age population, or people aged between 15 and 64.

Korea’s age dependency ratio, or the ratio of dependents - people younger than 15 or older than 64 - to the working-age population will climb rapidly in the next few decades, according to Statistics Korea.

In other words, the working age population in 2067 will have to take care of three times as many dependents as today.

“Korea’s ratio will be the highest among OECD member countries by 2065,” said Kim Jin, head of the population projection department of Statistics Korea.

This will rise to 275 million won in 2060, mainly due to the aging population and increased welfare costs against the backdrop of the low birthrate and reduction in tax revenues.

“With this low of a birthrate and the aging population, the financial situation for the working population will rapidly deteriorate,” said Ok Dong-sock, professor of economic policy at Incheon National University. “The government will have to stop its expensive, populism-based welfare policies and focus on solving the low birthrate problem.”

“The reason why the birthrate is low in the country is because, from a young person’s standpoint, it is more effective to not have a child than to have one,” said Park Young-beom, a professor of economics at Hansung University in central Seoul.

“The government cannot solve this problem by reusing old policies. It will have to rewrite its welfare, employment and industrial policies altogether to create an ecosystem in which young people feel secure enough to have children.”