Kang bats in two runs while Choi goes 0-for-4

Kang bats in two runs while Choi goes 0-for-4 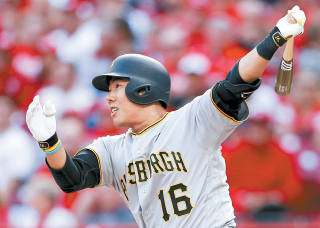 Kang Jung-ho of the Pittsburgh Pirates hits a two-run single during a game against the Cincinnati Reds at Great American Ball Park in Cincinnati on Thursday. [AP/YONHAP]

Kang went 1-for-3 with two RBIs in a 5-3 loss to the Cincinnati Reds at Great American Ball Park in Cincinnati on Thursday. This was Kang’s first start on Opening Day since he began his big league career with the Pirates in 2015.

In the second inning, Kang went down swinging on a changeup by starter Luis Castillo. He drew a walk in his next time up in the fourth.

Then in the sixth, with the Pirates trailing 1-0, Kang delivered a two-run single off new pitcher Jared Hughes to give his team a 2-1 lead.

The Pirates’ bullpen failed to preserve the lead, as the Reds put up a four-spot in the seventh. Kang struck out in the top of the eighth in his final plate appearance.

Kang is hoping to play his first full season since his sophomore year in 2016. He missed the entire 2017 season and all but three games the following year, due to legal trouble stemming from his drunk driving accident in Seoul in late 2016.

Kang’s four-year contract with the Pirates expired last year, but the Bucs signed him to a new one-year deal to give Kang a new lease on his career. The 31-year-old responded with a major league-best seven home runs in spring training and won the everyday third base job out of camp.

The 27-year-old journeyman had bounced around a few organizations before joining the Rays in a midseason trade from the Milwaukee Brewers last year. He settled in nicely with the new team and had an excellent spring training this year with a line of .366/.481/.585 in 15 games.

Batting third as first baseman, Choi grounded out in the first and struck out swinging in the third, both against starter Justin Verlander.

Choi reached on a fielding error in the sixth and struck out looking in the eighth inning in his final at-bat. The Rays lost the game 5-1.

Texas Rangers’ Choo Shin-soo didn’t play in the opener against the Chicago Cubs at home in Arlington, Texas, missing the Opening Day for the first time in 11 years.

With left-hander Jon Lester starting for the Cubs, Choo, who bats left-handed, was benched in favor of right-handed veteran Hunter Pence in the designated hitter spot. The Rangers fell 12-4.

Choo, who earned his first All-Star selection last year, is still expected to get a bulk of action at DH this season.

“I’m an everyday player. There is a reason why I am here,” Choo was quoted as saying on MLB.com. “But the lineup is out of my hands. Any questions, ask the manager.”