The historic moment when Chung Hyeon took down Novak Djokovic at the 2018 Australian Open heralded a new era in which Korea, a largely overlooked nation in the world of tennis, was suddenly seriously competitive. 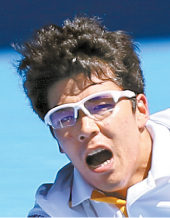 Or at least it should have.

In reality, Chung went on to beat Tennys Sandgren in the quarterfinals before crashing out to Roger Federer in the semifinals. Getting that far at a grand slam tournament was a huge achievement, both for Chung and for Korean tennis. Success in Australia saw Chung start a quarterfinal run that had him climb through the world ranking to eventually make it into the top 20 to peak at No. 19 in May.

But Chung didn’t actually lose to Federer on Jan. 26 last year, at least not by playing three sets of tennis. Chung left the court after just two sets due to blisters on his feet, dropping out of the Australian Open semifinal because he was unable to put weight on his feet and continue playing under the hot Melbourne sun.

Although disappointed, fans didn’t blame Chung for dropping out of the Australian Open. The fairly graphic picture of his feet he tweeted later left little doubt that continuing to play would have been impossible, and his achievement at the tournament was already impressive enough to bring tennis back into the mainstream in Korea.

But that wasn’t the only time injury forced Chung off the court.

In April last year, Chung was forced to pull out of the Barcelona Open with an ankle injury that was still causing problems in July, when he also dropped out of Wimbledon. In August, Chung was once again scheduled to face Djokovic, this time at the Rogers Cup, but had to pull out due to a back injury. He then withdrew from the Paris Masters in October, officially ending his season early.

The 2018 season was a particularly bad one for the injury-prone Chung, with the long periods of absence made worse by his newfound fame and growing fan base, but it wasn’t the first time he had dealt with significant injuries. In 2016, Chung was forced to end his season early and take four months off after the French Open due to an abdominal injury.

However, things are not looking good this year either. After a disappointingly early finish in 2018, Chung got off to a slow start by getting eliminated in the first round in the two tournaments he competed in during January - the Maharashtra Open and ASB Classic. Then, at the Australian Open, Chung’s performance this year was nothing like his miraculous run last year as he was eliminated in the second round.

Following the Australian Open, Chung was hardly seen on the court. Chung competed at the 2019 ABN AMRO World Tennis Tournament in the Netherlands, which started on Feb. 11, but made an early exit by losing in the first round. Then, due to a back injury, Chung withdrew from The Open 13 tournament in Marseille, France, Dubai Tennis Championships and the Indian Wells Masters. The ongoing Miami Open was expected to be the tournament that saw Chung return, but he once again dropped out as he hasn’t fully recovered.

“I regret to tell you that I had to withdraw from @miamiopen due to back injury I have been dealing with since last year,” Chung posted on Instagram on March 19. “I am trying my best to stay positive and move forward in my professional career. So long until I see you all back on court healthy!”

Chung’s injuries took a considerable toll on his world ranking. After establishing himself as the best Korean tennis player ever - and one of the best Asian players of all time - Chung found himself tumbling down the world ranking, falling from No. 19 in May last year before ending the season at No. 25 and falling to No. 92 as of March 23.

As he missed out at the Miami Open, Chung’s world ranking is expected to drop once again, possibly outside the top 100 this time.

Chung is expected to resume his season in April.