The six-episode drama is an action- and romance-packed adaptation of master spy novelist John le Carre’s 1983 book about an English actress-turned-double agent torn by divided loyalties as she infiltrates a Palestinian terrorist network under Israeli orders.

Featuring solid performances by rising actress Florence Pugh as the lead protagonist Charlie alongside acclaimed stars like Michael Shannon and Alexander Skarsgard, the series concluded its successful run in Britain and the United States last December with a certified 95 percent fresh on Rotten Tomatoes.

On Friday, a director’s cut version of the entire series was uploaded exclusively on Korean streaming platform Watcha Play. This never-before-seen edition was especially made “to realize the vision I had in mind in the beginning” free from broadcasting regulations, according to Park.

“I feel like the long time I spent on this project is finally coming to a wrap,” the director told the JoongAng Ilbo, an affiliate of the Korea JoongAng Daily, during an interview on Monday in Seoul ahead of the release of the director’s cut.

“The preview screening at a theater last Saturday was the first time I saw the entire series. I had felt like something was unfinished before, but after seeing the director’s cut, I feel like now it’s done.”

Q. How did you end up making “The Little Drummer Girl” into a miniseries rather than a movie? 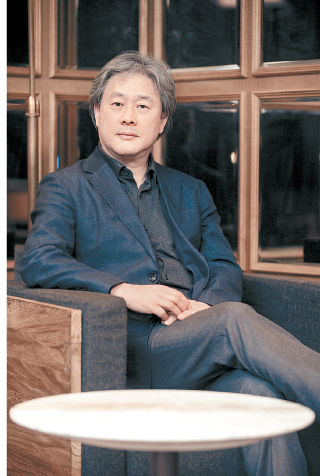 A. Although I’ve been a fan of le Carre for a long time, I only got into “The Little Drummer Girl” relatively recently following my wife’s recommendation. I didn’t warm up to the novel at first because it featured a seemingly average female protagonist and romance, when I like works like “Tinker Tailor Soldier Spy” and “Smiley’s People” that described the world of spies in cold and dry detail. But half way through, I realized it went deeper than just another spy novel. It was a masterpiece worthy of a Nobel Prize in Literature.

I sought out le Carre’s two sons and told them I wanted to work with the novel. I thought it would be a shame to cut out characters by turning it into a movie. After watching the 1984 American film version of “The Little Drummer Girl,” I realized what kind of disaster might occur if I tried shortening things by force.

It was fate to do a miniseries.

What’s the difference between the TV broadcast version and the director’s cut?

There are moments where the editing was done differently or where I selected other footage for the same scene.

My tastes were different from the broadcasters in some regard.

The BBC censored violence while the American network restricted profanity and showing skin. In the director’s cut, I included some scenes that had to be taken out [for TV] even though they weren’t too provocative. I also spent time on scenes where editing had been rushed.

I stuck around for two more months after the series ended on TV to work on [the director’s cut] even though I wanted to return quickly to Korea to have some naengmyun, (Korean cold noodles). I was determined to leave a director’s cut for this project.

“Joint Security Area” (2000) is similar to “The Little Drummer Girl” in that they both address the pain and relationships of individuals living through a tragic time in history. Was it difficult addressing a sensitive issue like the Israeli-Palestinian conflict as a third party?

Although “Oldboy” and “The Handmaiden” are better known overseas, for this series I drew on my experience directing “Joint Security Area.” As someone who has lived in the Korean Peninsula, I could sympathize with the endless conflict and the vicious cycle of violence where each attack is followed by even bigger revenge.

I studied a lot to avoid making mistakes about historical events that I’m not familiar with. I asked Israelis and Arabs living in Britain whether there was anything offensive [in the series] through my producers.

But there were events that I could handle more objectively and critically because I was an outsider, like Britain’s promise to support both the Israelis and Arabs in building countries in the Palestinian territories during the First World War.

How was working with Florence Pugh?

I fell for her after watching “Lady Macbeth” (2016). I invited Pugh to breakfast and she was well-spoken and clear. Her natural curiosity, courage and boldness make it easier to understand Charlie’s dangerous decisions.

Were you trying to break stereotypes by casting Alexander Skarsgard as an Israeli?

Initially, I was trying to cast an actual Israeli or someone who looked Israeli for the roles of the Mossad intelligence agency members. But then I began wondering whether it was necessary to stick to these racial stereotypes. Although Skarsgard might not look it, there are Israelis who look like him. And if I was in Mossad and working in Europe I would probably hire people like him.

I came to like Skarsgard after watching him in the TV series “Big Little Lies” alongside Nicole Kidman. In fact, Kidman, who was in my film “Stoker” (2013), is said to have encouraged Skarsgard to try working with me.

Do you think you’ll direct another series?

Movies only go up to 130 minutes or so. I think it’s inevitable to use streaming services if I have a story I can’t fit into the time length.

What projects do you have coming up?

I’ve been working on a Hollywood Western movie for a long time. It hasn’t been confirmed yet. In Korea, I’m working on a mystery film.