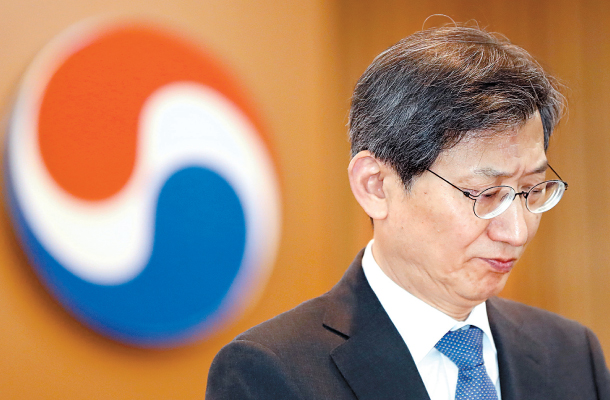 Half of the shareholders present at Hanjin Kal’s annual general meeting on Friday voted against the NPS proposal to remove directors with convictions for embezzlement or malpractice. Cho serves as director at the company and currently faces charges on both activities.

While the proposal needed two-thirds of the votes to pass, it only received 48.66 percent in approval.

The outcome follows Cho’s removal from the board of the group’s key affiliate Korean Air on Wednesday, after key shareholders expressed disapproval in his leadership. It was the first time that a chaebol head has been ousted by shareholders.

Cho has also faced mounting pressure from local activist hedge fund Korea Corporate Governance Improvement (KCGI), which has sought to shake up the group’s governance. The hedge fund is the second-largest shareholder of Hanjin Kal and had expressed opposition to Suk’s reappointment and submitted proposals such as outside director nominations.

Hanjin Kal filed a court appeal against the proposals. The Seoul High Court ruled last week, blocking KCGI as it did not meet the required minimum amount of time that shares need to be held for minority shareholder rights to be exercised.

Suk’s reappointment on Friday, however, did not come as a surprise as Korea Corporate Governance Service (KCGS), a proxy advisory firm to the NPS, recommended voting for Suk. KCGS disagreed with KCGI, saying the CEO did not have problems that would damage the company’s value or infringe shareholder rights.

The NPS has a 7.34 percent stake in Hanjin Kal, while the largest shareholder, Cho Yang-ho, and his associates have a 28.93 percent stake, followed by KCGI at 10.71 percent. Cho, however, is expected to face more pressure next year as director terms for both him and his son will end in March and KCGI will have held its shares long enough to make its proposals.

“The Korean Air annual general meeting is a milestone in changing the perspective of market actors and society,” said Kim at a lecture prior to the Hanjin Kal vote. “There is now awareness that controversial proposals need approval from shareholders, the market and society.”

The corporate watchdog chief also suggested that the NPS yield its shareholder rights to asset management companies, addressing concerns over the considerable influence of the pension fund.