Presidential spokesman Kim Eui-kyeom voluntarily resigned Friday after an explosive backlash to reports that he dabbled in real estate speculation - possibly with inside information.

On Wednesday, Kim was revealed to have purchased a two-story building in Heukseok-dong in Dongjak District for 2.57 billion won ($2.26 million won) last July. 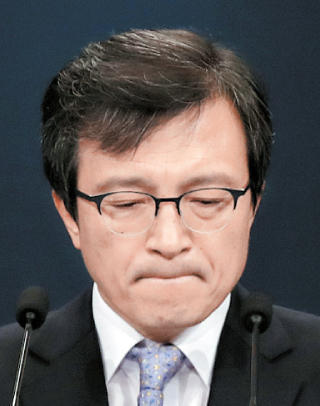 The area is being redeveloped, which could lead to big profits, and was considered so hot for investors that the government labeled it an “antispeculation zone” in August - just weeks after Kim’s purchase. Real estate investors in antispeculation zones are only allowed a single mortgage.

On Friday, Kim text messaged Blue House reporters to say he had not told the whole truth before because it sounded like “such a lame excuse,” but that he actually “didn’t know” about the real estate purchase.

“My wife made the decision without consulting me,” he added. “When I was aware, it was too late to reverse things. This, too, is my fault.”

Kim was criticized for borrowing a lot to purchase the property last July, as the Moon Jae-in administration was announcing tough measures to cool the real estate market by curbing speculation. On Aug. 27 last year, the government designated Dongjak District as an antispeculation zone. Kim’s purchase was July 2 last year.

Following an immediate public backlash, Kim explained Thursday that the property was for his retirement after a frugal life.

“For over 30 years since my marriage, I lived without my own home in jeonse [long-term rental deposit] housing,” Kim told reporters Thursday. His wife, a middle school teacher, retired in March 2018.

Kim has been living in a residence offered by the Blue House since becoming presidential spokesman in February 2018, but said he had to consider his options afterward in old age.

“The reason I bought that property is because after redevelopment, I knew it would become an apartment and a commercial building,” said Kim.

As the oldest son, he said, “I needed a spacious apartment to be able to live with my mother, and after I leave the Blue House, I won’t have any other wages, so I thought I could receive rental fees from the commercial space.” He said he was not trying to make any sort of profit or resell the property.

The real estate speculation accusation against Kim has been met with a frosty response by the ruling Democratic Party.

Rep. Hong Ik-pyo, a spokesman of the Democratic Party, said Friday, “We confirmed through media reports that the purchase of a property could be characterized to a certain degree as real estate speculation, which goes against public sentiment, and through many channels, [we] conveyed our concerns to the Blue House.”

Rep. Min Kyung-wook, spokesman for the main opposition Liberty Korea Party, called for President Moon Jae-in to “make a public apology” and “conduct an extensive probe to see if there are other cases.”