Moon to have summit with Trump soon

Moon to have summit with Trump soon 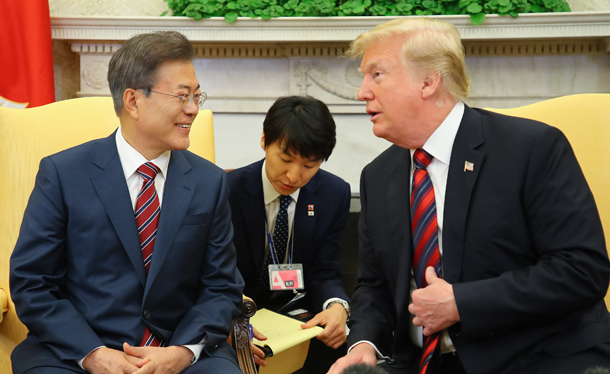 The Blue House announced Friday that Korean President Moon Jae-in will make a two-day trip to Washington on April 10 for a bilateral summit meeting with U.S. President Donald Trump on April 11. The file photo shows the two leaders meeting in the White House on May 22, 2018. [YONHAP]

President Moon Jae-in and U.S. President Donald Trump will hold a summit next month in Washington, the Blue House announced Friday, amid a standoff in denuclearization talks with North Korea.

Moon and first lady Kim Jung-sook will make a two-day official visit from April 10 upon the invitation of the U.S. president and first lady Melania Trump.

The summit with Trump is scheduled to take place on April 11, and Moon is expected to return to Seoul immediately, according to the Blue House.

Yoon Do-han, the Blue House senior secretary for public relations, said in a briefing that the two leaders will have “in-depth talks to discuss ways to strengthen the South Korea-U.S. alliance and to coordinate their stance on establishing a peace regime on the Korean Peninsula through complete denuclearization.”

This will be Moon and Trump’s first meeting since the second North-U.S. summit in Hanoi, Vietnam, on Feb. 27 and 28, which ended abruptly with no deal. Pyongyang favored a more phased approach toward denuclearization with partial sanctions relief while Washington pushed for a more comprehensive deal.

In the weeks afterward, Moon and his advisers have searched for the next steps forward.

Moon is expected to try to maintain a mediating role, but his visit comes amid concerns that Seoul and Washington are not on the same page.

The White House confirmed the summit and said in a statement that the two leaders “will discuss the latest developments regarding the Democratic People’s Republic of Korea as well as bilateral matters,” referring to the North with its official name.

It added, “The alliance between the United States and the Republic of Korea remains the linchpin of peace and security on the Korean Peninsula and in the region.” The Trump administration does not frequently use the term “linchpin,” and this statement seemed to emphasize the two countries’ strong relationship amid concerns that Seoul and Washington may not be on the same page.

The two leaders last met on Nov. 20 on the sidelines of the G-20 summit in Buenos Aires. It is their seventh summit since the two men took office. Trump called Moon on Air Force One on Feb. 28 as he departed from Hanoi to describe the failed summit with Kim.

South Korean Foreign Minister Kang Kyung-wha was scheduled to hold talks with U.S. Secretary of State Mike Pompeo on Friday in Washington after earlier attending a United Nations ministerial meeting on peacekeeping in New York. On Thursday, Kang told reporters at the Incheon International Airport before departing to the United States that she and Pompeo would discuss their perceptions following the Hanoi summit and “coordinate with each other on going forward.”

There has been a flurry of diplomacy among officials from North Korea, Russia, China, the United States and South Korea in recent days.

Washington has maintained it will continue its tough sanctions on North Korea while leaving open the door to diplomatic engagement.

Pompeo said Thursday on the possibility of a third North-U.S. summit, “I hope there will be a next time before too long,” at a panel hosted by the National Review Institute in Washington.

North Korean leader Kim Jong-un “knows that he’s young and wants to make sure that North Korea has a future,” Pompeo said. “So when he engages with you, he does so in a way that reflects the nature of a long trajectory for North Korea.”

Pompeo said that Kim “hasn’t yet demonstrated that he is prepared to fulfill the commitment that he made,” but that he believes “hard work and diplomatic effort may well get us there.”

Washington also “made a counter-proposal, too,” said Pompeo, “that we will be there to ensure that there’s a brighter future for the North Korean people.”

When asked about how Washington feels about Kim Jong-un coming back to the negotiation table soon, Robert Palladino, the deputy spokesman of the U.S. State Department, said, “We remain optimistic, as the secretary said yesterday, that diplomacy will be able to proceed forward.”

South Korean Defense Minister Jeong Kyeong-doo and the acting U.S. secretary of defense, Patrick Shanahan, will also hold talks in Washington next Monday to discuss the security situation on the Korean Peninsula, according to the South’s Ministry of National Defense Friday.