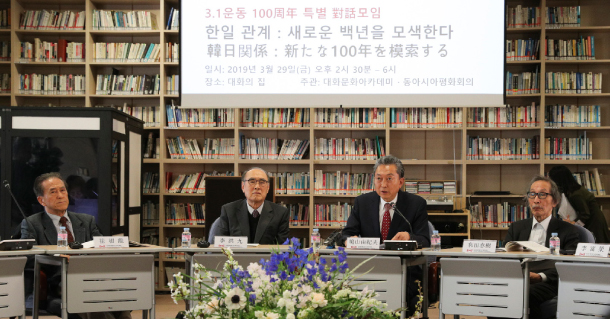 Former Japanese Prime Minister Yukio Hatoyama, second from right, speaks at a forum on Korea-Japan relations hosted in central Seoul on Friday by the Korea Dialogue Academy and International Conference for Peace in East Asia to commemorate the centennial of the Korean March 1 independence movement. To his right are former Korean Prime Minister Lee Hong-koo and former Ambassador of Korea to Japan Choi Sang-yong. [LIM HYUN-DONG]

Former Japanese Prime Minister Yukio Hatoyama said he hopes that the crown prince of Japan will visit Korea after he becomes emperor.

“I hope that the new emperor, who will be crowned in May, will have an opportunity to visit Korea amid much welcome from the people of Korea,” Hatoyama said during a forum on Korea-Japan relations in Seoul on Friday, hosted by Korea Dialogue Academy and International Conference for Peace in East Asia to commemorate the centennial of the Korean March 1 independence movement. “It would not be simple, but [the visit] will help bilateral relations take leaps.”

No emperor of Japan has ever visited Korea.

The crown prince of Japan, Naruhito, 59, is to be enthroned in May after his father, Emperor Akihito, 85, abdicates at the end of April. This would be the first time in two centuries that an incumbent emperor of Japan abdicates. The last time it happened was in 1817, when Emperor Kokaku abdicated in favor of his son, Ninko. Kokaku died in 1840.

Hatoyama, who was prime minister of Japan from 2009 to 2010, is known for pro-Korean views. During a visit to Korea last year, Hatoyama met with atomic bomb survivors in Hapcheon County, South Gyeongsang, and apologized for their sufferings during Japan’s colonial rule (1910-45) and during the atomic bombing. Some 50,000 Koreans died when the United States dropped atomic bombs in Japan during World War II. Many of them were forced laborers in Japan.

During a visit to Korea in 2015, Hatoyama knelt in front of the Seodaemun Prison History Hall in western Seoul, where Korean independence and pro-democracy activists were jailed and martyred, and apologized.

“Emperor Akihito has expressed truthfully and clearly his apology to the people of Korea,” Hatoyama said.

He said that the emperor, in meeting with then-Korean President Roh Tae-woo in Japan in 1990, told Roh that he had a “deep regret” in his heart when thinking of “the pains Korean people experienced” during the Japanese colonization of Korea.

Some Korean experts at the forum agreed with Hatoyama on this point.

“If you think about it, there has not been a leader in the Shinzo Abe government who apologized to the level that the emperor did,” said Choi Sang-yong, former ambassador of Korea to Japan.

Hatoyama added that the emperor’s statements must be reflected by the Japanese government.

The participants in the forum also discussed the feasibility of creating a European Union-like partnership in East Asia, which was Hatoyama’s goal when he was the prime minister. “There are limitations to this possibility,” Choi said. “Prime Minister Abe keeps talking about being a ‘Proactive Contributor to Peace’ while China’s President Xi Jinping keeps talking about the ‘Chinese Dream,’” adding that they are on two different tracks.

Some 30 people took part in the forum, including Lee Hong-koo, the former prime minister of Korea, and Hong Seok-hyun, chairman of the Korea Peace Foundation.

“Thank you Prime Minister Hatoyama, for traveling all the way here to help restore Korea-Japan relations,” Hong said in remarks. “I was deeply moved after reading your sincere speech… [we] will also take good care to express your meaning.”