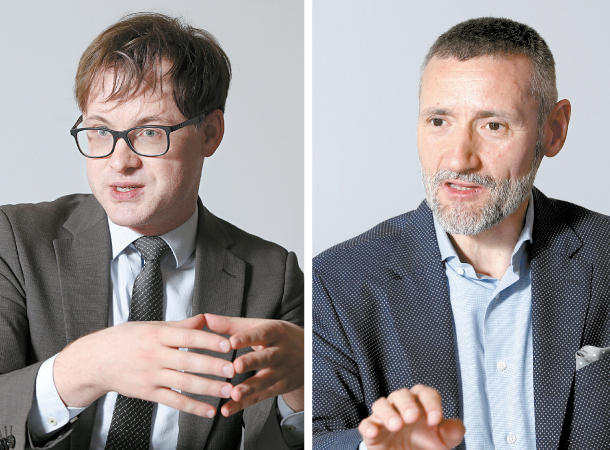 The eyes of smart technology developers from around the world are on Korea, according to Dominic Gorecky, the CEO of Swiss Smart Factory.

“We build collaborations in several countries and Korea, of course, is a hot spot,” Gorecky told the Korea JoongAng Daily on a recent visit to Seoul and Ulsan. “Korea is a country that is much driven by innovation and thrilled with new technology, and we thus see a lot of complementarities between Switzerland and Korea.”

Gorecky was in Korea earlier this month to explore new and renew existing partnerships with developers, including the Ulsan National Institute of Science and Technology. During a visit last year, the Swiss Smart Factory signed an agreement to cooperate with a South Korean start-up, ulalaLab, on Internet of Things (IoT) technology.

It is no secret that the South Korean government is interested in smart technology and is wrestling with how to deal with existing regulations. Especially as a 5G mobile network will be launched in April, the first in the world.

The city government of Seoul is trying to apply some of the technology to its administration. During a trip to Zug, Switzerland, in October 2018, Seoul Mayor Park Won-soon announced a plan to use blockchain technology in the city’s administration and to establish an ecosystem in the city to attract blockchain experts. Zug is home to Crypto Valley, a blockchain development hub.

“And just recently, the Seoul Metropolitan Government announced its plan to put up some 50,000 sensors for measurement of pollution in the air, traffic congestion and others,” said Roger Zbinden, counselor of trade and investment at the Swiss Embassy in Seoul and the head of the Swiss Business Hub Korea. “There are not many cities that can achieve this.

“But I am quite sure that Seoul will be able to,” he continued, “because it has the power and technology to do so, and it is not shy about cooperating with international actors to buy the technology if it has to. I am quite confident that we will see a lot of things change here in Seoul.”

The two sat down for an interview with the Korea JoongAng Daily on March 14 to discuss the latest bilateral cooperation on fourth industrial revolution technology and address some critics’ concerns about moving forward with the revolution. The following are edited experts of the interview.

Q. For those unfamiliar with the topic, what exactly is a smart factory?

Gorecky: A smart factory in general is an intelligent plant, a factory that is well-embedded in its environment — it is part of a smart environment, city and society. But in our case, the Swiss Smart Factory is a one-stop shop for everything that relates to digital innovation in industry. It is a kind of a center for tests and demonstrations and further development of technologies.

So it’s a physical place but also it’s a network. It represents a network of companies from large multinational technology providers to application partners, manufacturing companies and also start-ups. In other words, it is a service center that helps establish smart factories around it. So in the end, it enables an ecosystem that is needed to create the collaboration that we require for the digital age.

What does it mean to make factories smarter?

Gorecky: We build on pre-existing infrastructure and we provide consulting on how to evolve it further. And then when they come to our demo center, they see what is possible and are inspired. So they find ideas which they can take up and we can support them to integrate these ideas in their facilities.

For example, one current project at the factory is on integration of individual machines and equipment. By themselves, they may be smart, but they are often not networked. We connect these machines and the available equipment so that we can better understand the whole system and better control and optimize the work.

What deals are you doing in Korea?

Gorecky: We have an MOU with a Korean start-up on Internet of Things technology called ulalaLAB. During my visit this time, we met with experts at Ulsan National Institute of Science and Technology.

Being part of the Switzerland Innovation Park, the Swiss Smart Factory understands its function as a gateway for foreign organizations, companies and research institutes. We build collaboration in several countries and Korea, of course, is a hot spot. Korea is a country that is so much driven by innovation, that it is thrilled by new technology and we thus see a lot of complementarities between Switzerland and Korea.

How do you address the concerns of people being left behind in technological advancements?

Gorecky: Technological advancement is not new to us — robots are not new to factories. In the 1970s, we had discussions about what is going to happen next when we start to automatize welding processes in the automotive industry, for example. Now looking back, we can say to some extent it was right to say that some jobs would disappear, but what it has finally brought us is that new jobs have been created.

If we ignore the technological trends, I think our economy will not be sustained. We’ll lose competitiveness and then we have a real problem. There is actually no alternative than going forward, but, of course, it has to happen with a social discourse, and a discussion taking into account the fears and the needs of the society as well.

Zbinden: We had an interesting discussion with some executives here last week on this topic. There was a study by McKinsey last October that predicted that by 2030, in Switzerland, about 25 percent of all jobs will disappear and that automation will create about 20 percent of new jobs. But these jobs will be very different. The major challenge of companies and the public sector is to re-skill people. A simple example would be taxi drivers. Maybe in 10 years there will be no taxi drivers left because everybody is jumping into autonomous vehicles. But you cannot ask a taxi driver to become a data analyst. So the re-skilling of the labor force, that will be the major challenge.

How do you think educational institutions can make a difference?

Zbinden: The flexibility that companies and societies can have in re-skilling the labor force is directly connected to the education system. If you have a rigid education system, then this transformation is difficult. In Switzerland, we have an alternative [to university education] called vocational training. You can be trained for 250 to 260 different jobs, including plumber, baker, electrician, etcetera. Then you go to a company and they have people who focus on educating the young people who want to learn this trade. This type of education takes usually three to four years and then you are a fully fledged craftsman or craftswoman.

Are Swiss small- and medium-sized enterprises (SMEs) on board with going smart?

Gorecky: SMEs are the backbone of the Swiss economy. I would say 99 percent of the Swiss economy is supported by SMEs. And the trend among SMEs today is on interconnecting machines via IoT, to make machines speak to each other. For instance, to make a Japanese robot speak to the Swiss tool machine using maybe some Korean equipment. That is an example of interoperability that must be enabled.

Tell us about the concept of Industry 4.0 in Europe.

Zbinden: Gorecky was one of the pioneers of the concept.

Gorecky: I was working for an artificial intelligence and smart factory in Germany at the time. We were there in 2010 preparing the concept. In 2011, there were first public mentions of this concept and it is impressive to see how this wave has now spread.

If you want to give a definition of Industry 4.0, it would be this: In the end, it is the convergence of the Internet of Things in the manufacturing domain and beyond, including logistics and all smart ecosystems. Industry 4.0 is a networking of machines via IoT. Everything is networked, connected and provides data to IT systems. And the humans then have access to this information, to filter it and aggregate it and reprocess and analyze it for a better picture of what is happening and to make improvements. This is what we call vertical integration.

The third and last type of integration that we see is digital continuity. This means that we decide everything in the digital world — everything that exists is born digital and then it becomes reality. So whatever exists has a digital counterpart, has a shadow, a digital twin. We will use this digital twin in order to simulate or test and experience things that are otherwise not possible.

These are the three forms of integration that are connected to idea of Industry 4.0 on the technical level. It’s a non-concluded picture. It’s moving out of factories and into other domains. In a few years we will have a term called Society 5.0 and that is a more holistic view of these new technologies that penetrates everything around us, and that changes basically all domains of our life.