[ICONIC FOOD] Jajangmyeon, a dish full of emotions: The famous black noodles have gone from special luxury to a cheap comfort

[ICONIC FOOD] Jajangmyeon, a dish full of emotions: The famous black noodles have gone from special luxury to a cheap comfort 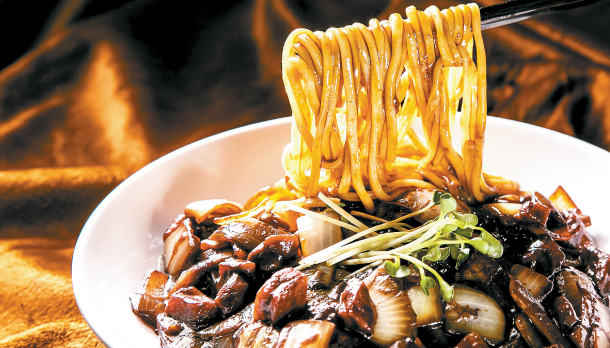 “My mom said she didn’t like jajangmyeon.” A line from K-pop group g.o.d’s song “Dear Mother” in 1999 gave many listeners a pinch of heartache. In the song, a kid from a poor household badgers his mom for something good one day, and the mother takes out some of her emergency cash to order a bowl of jajangmyeon (black noodles). But she didn’t eat it, claiming that she didn’t like it.

The dish that makes some people cry provides consolation for others. It, which is also known as jjajangmyeon, has become best known as an easy dish to get delivered, especially when moving in a new house. It is oily and heavy enough to provide energy after a long day of carrying heavy things, and usually only costs between 6,000 won ($5.30) and 10,000 won for a bowl.

The noodles are also a companion for those who are single on April 14, known in Korea as Black Day. After two straight months of holidays revolving around love (Valentine’s Day on Feb. 14 and White Day on March 14) those who are not in a relationship celebrate their singlehood on April 14 by enjoying a big bowl of jajangmyeon. It is said that the hearts of single people get burnt black because they miss out on getting sweet gifts earlier in the year, hence the black dish.

Noodles with black sauce, which was once seen as an item to long for, has become an everyday dish these days. It was once a luxury item not everybody had access to due to the low supply of flour in the country until years after the Korean War (1950-53). Flour consumption was encouraged thanks to greater flour supplies from the United States, but the dish was still treated as food only eaten on special occasions. In the popular 1992 cartoon “Black Rubber Shoe,” jajangmyeon was described as a dish to enjoy on a special day in the 1960s, such as after a graduation ceremony.

But entering the ’80s and ’90s, the noodles quickly became known as a quick and cheap treat to fill up a hungry stomach, especially as Chinese restaurants started to make it available for delivery. It was a popular snack among those playing billiards or video games, as they needed something easy to eat during their quick breaks between games.

To help people understand the history of and the changes that have been made to jajangmyeon over the years, the Jajangmyeon Museum opened its doors in Incheon’s Chinatown in 2012. The museum explains that the Chinese noodles called zhajiangmian were adapted in Incheon by Chinese descendants who opened restaurants here. One of the first eateries to do so is the restaurant Gonghwachun, which opened in 1908. The museum is actually inside is the renovated Gonghwachun. The recently aired TV drama “Mr. Sunshine,” which took place in the early 1900s, also features scenes with people eating black noodles.

The love for jajangmyeon, black noodles, have inspired people to delve down the history of the particular noodles, originated in China but adapted and developed in Korea. Left is book whose title is roughly translated to “Black Attraction, Diaspora of Taste Jjajangmyon” published in December. Right is a showcase displaying different types of instant noodles using the taste of chunjang, the black sauce, at Jjajangmyeon Museum in Incheon. [YONHAP]

The sauce for the noodle dish from China was originally saltier, so chefs here added caramel to sweeten it up. It later became known as chunjang. The Chinese sauce, using fermented beans, was a brownish color, but by adding caramel and grains, the sauce became darker over time.

The noodle dish started to become widespread from the 1960s to ’70s, according to chef Lim Tae-hoon of Chinese restaurant Aryang. It was known for its complex salty and sweet taste.

There are people who try out every Chinese restaurant in their neighborhood to find which jajangmyeon best suits their tastes. If you are curious about where to place your order, talk to real estate agents, PC room workers or nail shop owners in your neighborhood, as chances are, they know which one is the best. There are even some writers who delve deep into the history of jajangmyeon across Asia.

“Overall, the taste of jajangmyeon is deep, salty and sweet all together and that brings out gamchimat (umami), which many diners love in their food,” said freelance food writert Lee He-rim, adding that the dish has the charm of being called one of the people’s foods. “Although you may not crave such a full taste everyday, that gamchimat puts you under a spell and makes you want to devour the whole bowl of noodles.”

There are some different types of jajangmyeon depending on how you make the sauce and whether you serve the dish with the sauce already mixed with the noodles or just on top. The most common variation has chunjang mixed with water and starch alongside vegetables and pork served on top of the noodles. Ganjjajang only has chunjang with veggies and pork on top for a deeper taste. Yuni Jjajang uses the same sauce, but has its sauce ground up so the veggies and the meat is smaller. That particular variation is commonly given to young children or people who can’t chew anything big. Samseon jjajang has extra seafood in the sauce, while jaengban jjajang stir fries the sauce and noodles together before it is served. Some even add pepper oil to make Sichuan-style noodles.

With jajangmyeon becoming more popular, food companies worked hard to make an instant noodle variation as well. Chapagetti, first introduced in 1984, has become a convenience store staple, and a spicier version has hit the market as well.