[Disrupted Finance] The machines are taking over, and that may be good

[Disrupted Finance] The machines are taking over, and that may be good 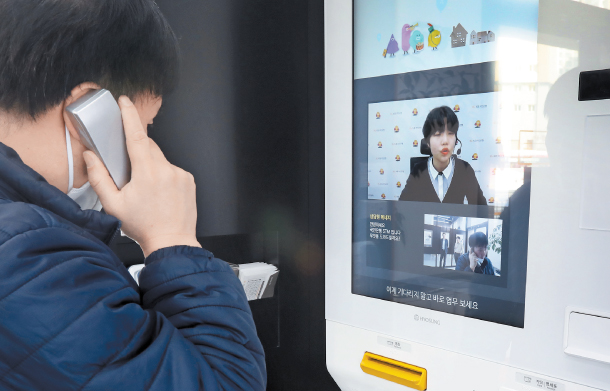 A customer uses a Smart Teller Machine to connect with a teller by video call at KB Kookmin Bank’s Woonyang Branch in Gimpo, Gyeonggi, on March 7. [PARK SANG-MOON]

Gimpo, Gyeonggi - In a new residential area in Gimpo, only 15 miles from downtown Seoul, a branch of KB Kookmin Bank features a row of teller machines. Nearby, bank employees staff a line of desks.

So far, so predictable.

But if you ask any of the bank employees for money from your account, they will politely decline. You are, it turns out, in a cashless bank.

The branch is just one element of the financial institution’s digital transformation. It wants to shift as much work as possible to machines and leave the humans at the branches to do only a few specific, specialized tasks: credit counseling and the sale of fund and savings products.

In line with the strategy, the country’s second-largest bank by net profit developed a digital kiosk. The Smart Teller Machine (STM) is essentially an advance version of the automated teller machine (ATM). It can dispense money and provide basic account information, just like an ATM.

It can also handle the issuing of cards, online banking applications and the opening of new bank accounts.

The shift comes amid the wider trend of consumers ditching cash for payments and favoring credit and debits cards and mobile payments. In 2017, only 20.3 percent of payments were made using cash, according to the Bank of Korea.

KB Kookmin Bank said that about 86 percent of its transactions are already processed via internet and app banking.

Opened in January, the Gimpo branch is the first in Korea where tellers do not handle cash at all.

“We have five tellers, which is relatively few compared to other branches, thanks to the advanced machines,” said Choi Woo-seok, head of the outlet.

“So, as simple tasks are done by the automated system, there has been less waiting and customers can get financial advice with ease,” Choi said.

The chief manager acknowledged that older people tend to have trouble using the machines, but these customers have gotten accustomed to the systems with the help of on-site employees and remote counseling by a video link on the STM.

“At first, we were worried that seniors could be poorly served by the technology, but later on, we found out that the older people adapt well to the new machines if they learn how to use them,” he said.

KB Kookmin Bank said that it designated the first half of this year as the test operation period for the new type of branch. After the test, it will decide whether the it will widen the initiative.

The plan goes hand in hand with the central bank’s “coinless society” project.

In a roadmap announced in 2016, the bank proposed reducing the circulation of coins by 2020. To achieve the goal, it rolled out different measures to expand digital payments.

Some European countries are already embracing the cashless trend.

In Sweden, where cash transactions are just 19 percent of the total, the country’s three biggest banks now have only 25 branches nationwide that deal with cash, or just 5 percent of their total branch networks, according to data cited by Financial Times.

The shift away cash in Europe is not only linked with a general affinity for digital payments but also the risk of robbery.

More than an ATM machine

The STM is fitted with different technologies, including biometric scanners, videotelephony and near field communication (NFC) readers.

For identification, KB adopted palm vein scanning, given that vein patterns are unique to individuals and can ensure a higher level of accuracy when compared with fingerprints.

On a recent day, a reporter applied for a new debit card for an existing KB bank account using the biometric verification on the STM at the Gimpo branch.

To start the biometric service, one must sign a consent form for the use of the information. The agreement is only needed once.

A registration process follows, where the machine asks if the user wants to connect with a teller via video call.

The client relations employee instructed the reporter to place a hand on the scanner three times so that the device could capture vein patterns with a special camera.

After choosing the type of card required, the card was printed and issued via a slot in the machine.

One of the most common functions, Choi said, is issuing a one-time password card, known as an OTP card. The password is valid for only one login.

The digital machines are installed at 29 locations, but KB plans to increase the number to 100 locations by the end of this year. KB Kookmin developed the STMs in partnership with Hyosung TNS, which also maintains the machines after installation.

Paperless is the new normal.

The bank installed digital tablets at more than 500 branches as of March. They negate the need to fill in paper documents for a wide range of financial services. By the end of this year, the bank plans to equip all branches with the tablet system.

The move is part of the bank’s efforts to go paperless with the aim of increasing convenience and potentially becoming more eco-friendly.

“The tablet system can help reduce hefty paperwork for tellers and efficiently store the records of registration and transactions,” said a spokesperson at KB Kookmin Bank.

The tablets will replace hundreds of documents required for lending, foreign currency exchange, deposits and other banking services. The move, KB said, can help reduce costs for storing and managing paper documents.

On the client side, paper forms typically have to be signed multiple times, while the digital system requires fewer signatures.

The digitalization effort is not just confined to the brick and mortar branches. Another important area of transformation centers around mobile banking services. The goal is to deliver a better user experience amid the rising number of people linking to their financial institutions electronically.

About 14 million of its customers, the vast majority of its account holders, are currently using the KB Star Banking app. KB has more mobile customers than Shinhan Bank and NongHyup Bank. It even has more customers than internet-only banks like Kakao Bank.

KB is now promoting its Liiv TalkTalk artificial intelligence (AI)-based banking app. Instead of featuring a myriad of menus, the app allows users to control functions in a chat room setting with an the AI-powered TalkTalk assistant.

Currently TalkTalk offers only a limited number of functions, but KB is working on expanding the range of services. The latest update allows for the lodging of fund and savings product applications and the payment of taxes and utility bills.

The TalkTalk app only has about 100,000 users, so KB is continually upgrading its main mobile banking service. One of the new functions added to the Star Banking app last year was a camera-based payment service designed for utility bills.

When a user takes a picture of a paper bill, the service scans the payment required and automatically processes the payment. KB is extending the range of camera-linked services this year, allowing users to send photos of documents required for financial services.

“Through regular updates and the use of AI technologies, KB is trying to serve mobile banking users,” said the spokesperson.

The use of AI-powered assistants or chatbots will grow both at home and abroad with the increasing number of mobile banking users. The global chatbot market is expected to grow more than 24 percent between 2018 and 2022, according to Technavio, a U.K.-based market tracker.