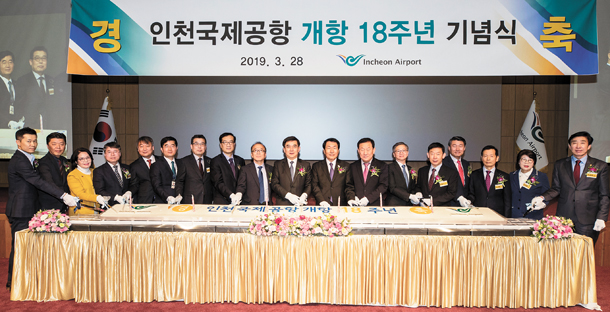 Incheon International Airport Corporation CEO Chung Il-young, tenth from left, cuts a cake to celebrate the 18th anniversary of Incheon Airport’s opening at the corporation’s auditorium in Incheon on Thursday along with lawmakers and related officials. [INCHEON INTERNATIONAL AIRPORT CORPORATION]

Incheon International Airport became the fifth-largest airport in the world in terms of number of passengers last year, the airport’s operator said Sunday citing a report from the Airports Council International.

In 2017, Korea’s largest airport was ranked seventh on the same report.

According to the Incheon International Airport Corporation, 67.68 million passengers used the airport last year, up 10 percent compared to 2017. With the figure, the airport beat Paris Charles de Gaulle Airport in France and Changi Airport in Singapore. The two airports were ranked sixth and seventh, respectively.

When the Korean airport first opened in 2002, the number of passengers amounted to 20.55 million, but grew by an average 7.7 percent ever year, the airport said.

The airport’s goal now is to make it a massive hub airport used by 100 million passengers per year. To do that, it is building up an additional runway and expanding the second passenger terminal that opened up last year. Construction is expected to be completed by 2023. By then, the corporation expects the airport to become the third-largest airport in the world.

Apart from physical expansion, the airport is also preparing to open up duty-free shops in the passenger arrival hall by the first half of this year. The airport operator said this will add to passenger convenience.

“From now on, Incheon Airport will grow to become a hub airport not only for Northeast Asia but for the world,” said Chung Il-young, the airport corporation’s CEO, during a ceremony held Thursday to celebrate the 18th anniversary of the airport’s opening.