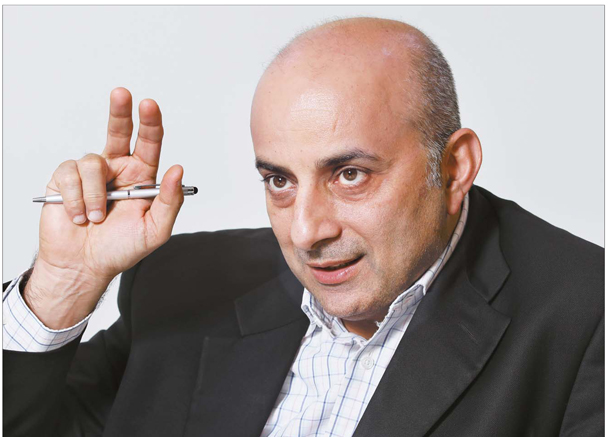 Global head of the International Finance Corporation Nikunj Jinsi shares his opinion on the Korean start-up ecosystem in an interview with the Korea JoongAng Daily at D.Camp’s headquarters in Gangnam District, southern Seoul. [PARK SANG-MOON]

Well, maybe not yet. According to Nikunj Jinsi, the global head in charge of venture capital investments for the International Finance Corporation (IFC), Korea still has “work to be done on the culture side as well as the regulatory side.”

Jinsi has overlooked investments in developing countries at the IFC, a sister organization to the World Bank, for nearly two decades. His visits to Korea have increased in the last two to three years as an adviser to government investment bodies and to speak at local conferences.

“Korea is an interesting market because, on the one hand, the venture industry here is quite underdeveloped,” he said. “Yet, there are so many ingredients in Korea that are really promising.”

He advised that in order to promote further growth, Korean start-ups and the government should broaden their view outside their own borders, as opposed to their current stance of being “a bit too closed.” The country has carmakers and electronics manufacturers thriving in the global market, so “Why can’t tech-driven ventures do the same?” he said.

Below is an excerpt of Jinsi’s interview with the Korea JoongAng Daily on March 20 at the D.Camp headquarters in Gangnam District, southern Seoul. 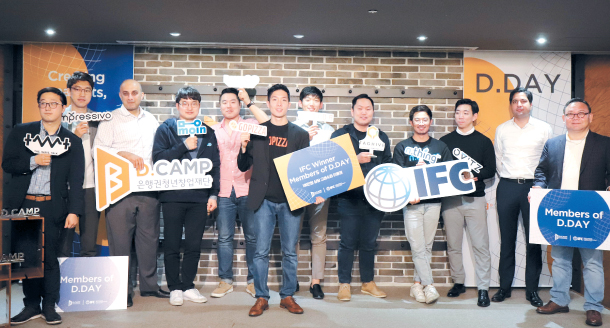 Jinsi, third from left, poses with the winner of D.Day, a monthly event at D.Camp where start-ups compete to introduce their business models and receive a co-working space or investments. [INTERNATIONAL FINANCE CORPORATION]

Q. What is your general assessment of the Korean start-up ecosystem?

A. I think Korea is an interesting market because, on one hand, the venture industry here is quite underdeveloped - very underdeveloped compared to most other developed markets.

Yet, there are so many ingredients in Korea that are so promising. It’s got great technology knowledge, great technology companies and a young, smart population with good engineering and technical skill sets.

Yet I think the culture, the mindset, in Korea isn’t there yet. When I say mindset, it’s about taking risks but also not having a fear of failing. We’ve seen [changes] in the last 10 to 15 years in economies like China, India and America, most middle and upper-middle class families wouldn’t allow their kids to go into start-ups. They wanted their children to either join a brand name organization or the government - more stable and prestigious jobs.

That mindset has been changing in other parts of the world. It’s starting to happen here but not there yet. For that you need more success - more unicorns, more successful exits. But that takes time.

I think what we need here in Korea is start-ups that find success beyond the pond. If you see other developing markets, there’s been a strong push from governments to make that happen by providing proper incentives. But here, it’s very Korea-centric and Korea can be much more region-wide. There’s too much of a focus on national players so I haven’t seen some of the global VCs or private equities come out here.

IFC focuses on start-ups that aim to do business in developing markets like the Philippines, Indonesia and Vietnam. In terms of this goal, what do you expect from Korea?

It’s an exciting place because, theoretically, there are lots of players, lots of opportunities here. As part of the World Bank group, we only look at developing markets. Korea is not a developing market, but we also invest in companies in Hong Kong, Singapore and the United States if they have the potential to help developing economies. It’s the same with Korea.

There’s an opportunity for digital entrepreneurs in developing countries that is humongous, much better than staying in Korea. That gives Korean start-ups an opportunity to export their strengths, which I think is the quality of people, the digital skills and the technology know-how. This can be a win-win for many other countries.

How does a collaboration with a private organization like D.Camp help your search?

I’m interested in learning about the entire ecosystem. D.Camp does stuff we cannot do like dealing with young entrepreneurs, sorting out investment applications for potential start-ups.

Winners in most cases will not survive in the next five years - that’s just the nature of the business. But for companies that do succeed, I rely on local institutions like D.Camp and several other partners to develop that early part of the ecosystem to nurture and allow for more entrepreneurs to come up. And we, as a financing institution, as long as the model fits within our mandate, we could be there to fund them and to go more regional in developing markets.

Markets in developing countries have a very different consumer base than Korea. But as you said, a lot of Korean start-ups focus on the domestic market. Do they have a chance?

First, it wasn’t long ago that Korea was a developing market, so it has a little bit of that DNA. Two, I think for Korean start-ups competing in Indonesia, the Philippines and Vietnam, it’s easier than doing so in Europe or the United States. It’s closer to home and there’s a bigger need to fill out there.

And if your start-up is not about deep technology but more about the business model, there are ways like deploying the technology towards missions like health, education, clean tech and tons of other sectors. Korea being so digitally inclusive and having so much access to data while other countries are opening, you could be doing a lot more.

The most successful venture-driven business here is Coupang. And that’s also local, not global. But in other countries you can find many e-commerce sites. You may think there are technologies unique to Korea that eventually could be exported elsewhere - that‘s the clue that we’re looking for.

Why do Korean start-ups find it harder to think globally?

I think it comes from the mindset and the fact that Korea is big itself. You could think if you sort out the Korean market you can start looking elsewhere.

The Korean market tends to be generally conservative both in terms of adopting new technologies and the fact that entrepreneurs are basically people that take the risk to become an entrepreneur instead of a career well-accepted by parents and elderly people.

Those few people who are taking the risk will focus initially on Korea, because taking the risk of thinking globally - I think the culture hasn’t been there for so long. For me, it’s a matter of when rather than if it happens.

Is there an example Korea could refer to?

Singapore and Hong Kong have done a lot in terms of framework, regulatory wise and also legal wise, that allows for things like minority protection. For example we see Indian companies incorporate in Singapore because they get some basic protection there for shareholders and management, as well as getting into a new region.

Some of the investors we’re dealing with now in Korea are government-linked. But the challenge is that government funds come with restrictions in that they need to have a Korean nexus. The companies they invest in should have a link to Korea which naturally may not be the case.

I lived in Singapore at a time when a lot of focus and emphasis for venture investment was on Singapore Inc. and Singaporean content. That didn’t really work. What they’re doing now is forming a business environment that makes it easier for global entrepreneurs to start a business there and allowing fund managers to have easy access to fund companies as long as they are based in Singapore. But their emphasis on the Singapore nexus is a lot looser.

You need to essentially sacrifice a nationalistic agenda for the fact that you’re happy to be a global hub and that you’re able to affect global entrepreneurs from all over the world.

Is there a role larger companies and the government can play in developing the start-up ecosystem?

Korea has conglomerates like Samsung, LG and Hanwha that play a huge role globally. But I feel these guys tend to provide support of start-ups as an act of national service rather than to build a local ecosystem.

I think the government has to embrace some of the larger conglomerates to seek development of something indigenous and on the basis of their own strength in taking local start-ups outside. But there may not be a direct economic incentive for conglomerates to do that so there should be another incentive, like in the form of tax breaks.

Another question we’ve been looking into a lot lately is the ease of doing business in the digital context. If you study ecosystems in markets like Silicon Valley, France and Israel, there are cases where the government intervened in the early stage but now are getting their hands off and trying to step back. Right now, Korea is at the stage where the government has to provide incentives. Korea is a legitimate democracy but a very regulated one. People are not very used to dealing with chaotic scenarios. Therefore, some form of intervention at the early stage is required - intervention as in providing regulatory and legal incentives. What kind of intervention is optimal differs by area.

I’d study what happened in many markets. You don’t need to copy it, but you need to understand [it,] and there’s enough intelligence in this country to find out how to adapt it to the local scenario.