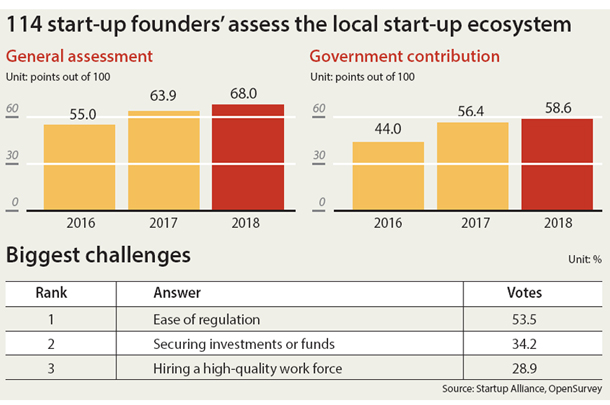 Earlier this month, the government announced a plan to invest a whopping 100 trillion won ($88 billion) in small- and medium-sized companies over the next three years. Underlining the pledge is President Moon Jae-in’s hope to ignite a “second venture boom” in the country.

But out in the field, a lot of start-up entrepreneurs complain that regulation is their biggest obstacle in doing business, more so than securing funds.

For two years straight, easing regulations was voted the No. 1 most important task to be resolved in order to foster a favorable start-up ecosystem in the country, according to an October report from research firm OpenSurvey and Startup Alliance, a support center for local start-ups. The answer was chosen by 53.5 percent of 114 start-ups founders - an increase from the 43.1 percent in the 2017 report.

“I feel some of the weird regulations exist to protect the business of existing companies or conglomerates in the industry - if that’s to prevent launching new services, I want to question how this country wants to bring about an ‘innovative economy’ or economic development,” said one survey participant.

The general opinion among founders is that regulations should be eased except when absolutely necessary.

The second biggest challenge, according to the survey, is difficulty in attracting funding - chosen by 34.2 percent of survey participants.

Korea’s venture capital market is rapidly growing. According to the Korean Venture Capital Association, the volume of investments made by venture capitalists last year totaled 3.4 trillion won, a 43.9 percent increase year on year. This was a big jump compared to the previous three years when figures remained in the 2 trillion won level.

But not all of the increase was solely based in the private sector. The government offered funds to support venture capital, too.

While the government’s 100 trillion won plan is sure to benefit start-ups financially - especially early-stage ones - some experts and researchers say that Korea lacks a virtuous cycle created by the private sector collecting profit through exits, by start-ups either merging with larger companies or going public.

In a virtuous start-up investment cycle, the founder and private investors like venture capitals raise a return on their investment. That profit would be used to launch another business or invest in another company.

“In most advanced companies, investment by venture capital takes up a crucial role,” said a Korea International Trade Association (KITA) report released last July. “For local start-ups, the norm is to receive bank loans or government funding while money from venture capitals is small.”

Researcher Kang Hyo-jin of the National IT Industry Promotion Agency pointed out that there was a cultural aspect to local start-ups having difficulty attracting private sector investment.

“Korea is culturally not lenient to failure - this means professional investors who have to make a presence based on their performance are very sensitive to investment losses,” she said.

However, the country’s start-up ecosystem is slowly showing signs of improvement, according to earlier survey results. The 114 start-up founders rated the general ecosystem at 68 out of 100, a rise from 63.9 in 2017 and 55 in 2016.

What they thought was the biggest positive change was the shift in public perception of start-ups.

“In the past, joining a conglomerate affiliate was considered the best career path. Nowadays, I see more people choosing start-ups instead,” said one survey participant.