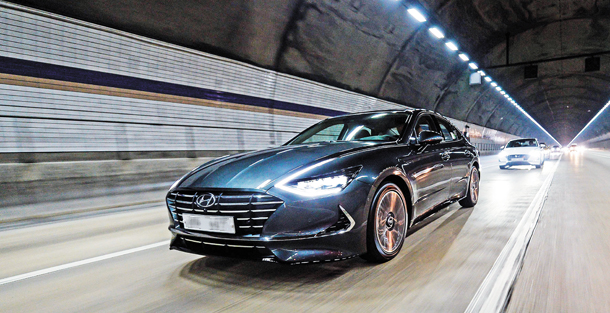 NAMYANGJU, Gyeonggi - Once considered the definitive family sedan in Korea, Hyundai Motor’s Sonata has suffered an image crisis in recent years as it became better known as the go-to taxi vehicle and lost out to larger-sized cars.

With a modern sporty design and a long list of new features, the automaker’s eighth-generation Sonata succeeds in overhauling its tired image but falls flat in pulling off a complete renewal.

On a 75-kilometer (46.6-mile) drive from Goyang, Gyeonggi, to Namyangju on March 21, the Korea JoongAng Daily got behind the wheel of the new Sonata that tipped toward style over performance.

At first sight, the new Sonata sports a strikingly different look from previous generations, a far cry from the Sonata taxis on the road.

Designers at Hyundai abandoned the safe, generic appearance of the four-door sedan, and opted for flashier visuals such as daytime running lights that extend to the body’s chrome lines, a coupe-like shape with shorter overhang and rear LED lamps that stretch out to add to the modern design.

While the exterior design decisions are really a matter of personal preference, its interior impresses with a lean look and a thought-out utilization of space.

Hyundai said it was inspired by a stealth jet to create a futuristic design, installing slim air vents, ambient mood lamps and a dashboard display.

The car also got rid of the physical shift stick, replacing it with a button-based electronic shifter.

Space really won’t be an issue for a four-person family as the back had plenty of leg and head room for this 5-foot-9-inch tall reporter. The designers also added a nice touch in the front with a slot for a smartphone between the cup holders in the center.

The automaker ramped up on technology, adding a smart key that can be shared through smartphones with up to three users and remote parking assist, in which drivers can control their vehicles to move forward or backward using the smart key.

On the road, the additional tech features continued to impress and assist the driving experience.

Hyundai has equipped the vehicle with some of its smart safety features such as lane keep assist and forward collision avoidance assist as standard in all trims.

Compared to the competition, the automaker has really nailed down the features. During the drive on the highway, a vehicle in the front came to a sudden stop and the forward collision avoidance assist feature worked perfectly to slow the car down. Furthermore, when intentionally swerving slightly out of the lane, the steering wheel automatically adjusted itself to stay safely between the lines.

The dashboard display also doubles as a blind spot monitor when switching lanes, showing the entirety of the rear view compared to just the side mirrors.

The safety amenities are impressive considering the vehicle is priced in the 20 million won ($17,600) to 30 million won range. Yet the driving comfort and its performance were lackluster at best, leaving much to be desired.

Compared to its sporty look, the vehicle’s acceleration was slightly delayed every time the pedal was pressed. Hyundai said it introduced a new “Smart Stream” engine that improves efficiency and reduces emissions, all while capturing performance.

While the new Sonata lagged in initial acceleration, it did reach high speeds of up to 150 kilometers per hour (93 miles per hour). Yet the high speeds took much of the confidence and stability away due to abnormally high levels of vibration and noise.

Hyundai has admitted to the issue and delivery of the vehicle is currently being delayed. The automaker has said that the sedan has quality-control problems when it comes to noise, vibration and harshness in driving and that it is working to improve the issue.

The delay is a significant blow to the automaker’s attempt to introduce a renewed Sonata that is supposed to have addressed the previous generations’ lackluster design and features.

Despite the disappointment, considering the vehicle’s target audience of family drivers and its affordability, the issues may not be entirely off-putting for potential buyers.

The 2.0-liter gasoline version of the Sonata also starts at 23.46 million won for the base model, with the highest trim costing from 32.89 million won.

The automaker will also release a hybrid version of the Sonata, which aims for a fuel efficiency of 20 kilometers per liter, in June and the 1.6-liter turbo Sonata in July.