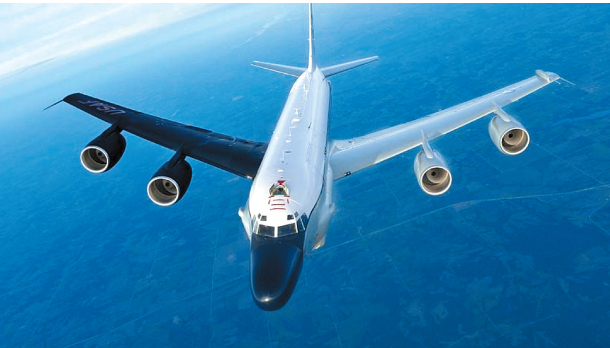 A U.S. reconnaissance aircraft specialized in observing ballistic missiles arrived at a U.S. air base in Okinawa, Japan, on Saturday, fueling speculation that a North Korean rocket launch may be imminent.

According to Aircraft Spots, a Twitter account that tracks military aircraft worldwide, a U.S. Air Force RC-135S plane was seen arriving at Kadena Air Base in Okinawa at around 8:30 p.m. Saturday after departing from a U.S. military base in the Indian Ocean earlier that same day.

The U.S. Air Force only has three Boeing RC-135Ss in operation, which were deployed to Kadena in rotation in 2017 when the North test-fired more than a dozen missiles over a span of several months.

The spy planes - known as Cobra Ball - are equipped with radar, infrared and visible spectrum cameras that can track ballistic missiles - and the possible warheads or satellites attached to them - in their final phase of flight.

The plane in question is believed to have been redirected from the island base at Diego Garcia to Okinawa after observing an anti-satellite missile test by the Indian military on Thursday.

While these planes’ transponders are usually turned off during military operations to avoid detection, this most recent deployment could have been intentionally left visible by the United States.

The last time Cobra Ball planes were spotted near the Korean Peninsula was on Nov. 29, 2017 - the last time North Korea tested its Hwasong-15 intercontinental ballistic missile (ICBM). The missile is believed to have the theoretical capacity of reaching the U.S. mainland.

Analysts say the deployment of the RC-135S - and possibly those of an E-3 Airborne Warning and Control System and RC-12X intelligence aircraft to Osan airbase on March 18 - could be preparation by the United States in the event of a rocket launch by Pyongyang.

According to South Korea’s National Intelligence Service, whose chief Suh Hoon testified to the National Assembly on Friday, the North has nearly completed the restoration of the Sohae Satellite Launching Station on its western coast, where resumed activity was observed last month by nuclear experts and intelligence officials in the United States and South Korea.

Suh had said earlier during an intelligence briefing on March 5 that increased traffic in the form of freight trucks was spotted near the North’s military plant in Sanumdong near Pyongyang, where its ICBMs are believed to have been built.

One government source in South Korea told the JoongAng Ilbo that the North could be gearing up to launch not a warhead but a satellite equipped with new technology brought in from China. In 2016, North Korea launched the Kwangmyongsong-4, which it claimed to have put into orbit around the Earth intended for peaceful, scientific purposes.

North Korea maintains a distinction between military testing of its ballistic missiles and that of its satellites, though nuclear experts abroad say the fact that the same type of rockets are used for both purposes makes that difference hollow.

“The U.S. deployment of a Cobra Ball to Japan could be intended to watch for missiles or satellites launched by North Korea or China,” said Ryu Sung-yeop, a researcher at the Korea Research Institute for Military Affairs, a private military think tank in South Korea. “It currently looks likely to be related to the activities taking place at Sanumdong.”