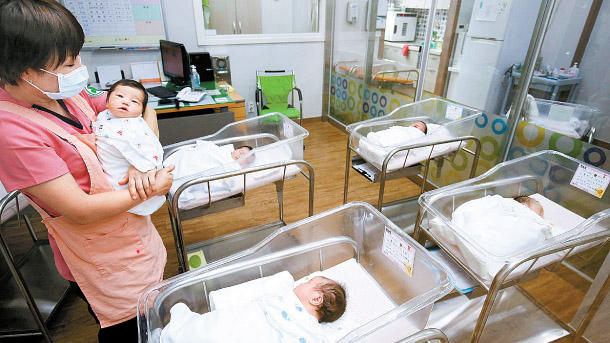 A nurse takes care of a newborn at a public postnatal care center in Haenam County, South Jeolla, on March 5. Haenam has had the highest birthrate in Korea for the past six years. [JANG JUNG-PIL]

At the gynecology clinic of Haenam General Hospital in Haenam County, South Jeolla, five of the six wards were empty on March 5. An official at the hospital said most expecting mothers living in the county go to nearby cities like Mokpo or Gwangju to give birth.

Since the clinic opened in January last year, 46 babies were delivered over the past 14 months. The figure was considered low, since the facility is the only hospital in Haenam with specialized doctors and equipment for childbirth. Last year, the county had 513 newborns.

However, Haenam’s population is rapidly decreasing. Despite the local government pouring 17.9 billion won ($15 million) into the county for childbirth subsidies for seven years, 1,700 children have left the area. While families with children who have received the grants are moving out of the region, the number of elderly deaths has increased, pulling down the population. This phenomenon is mirrored in other regional areas.

The grants are given accordingly to birth order within the family, so if a family already had a child born outside Haenam when they are preparing to have a second in the county, they would be eligible for a 3.5 million won grant for their second child.

At first, only families who resided in the county for more than one year were eligible for the grants, but the requirement has been eased. As of now, the mother’s residency only has to be registered with the county at the time of childbirth.

The effects were huge. The birthrate jumped from 1.43 to 2.47 between 2009 and 2012. In the same period, the number of children born increased from 530 to 832. Since then, Haenam has maintained a birthrate twice the national average. But it was not enough to stop the county’s population from going down.

Haenam’s population fell from 81,148 to 71,901 in the period from 2009 to 2018, an 11 percent drop over 10 years. It was because the number of deaths was about 20 to 30 percent higher than the number of newborns. The number of newborn babies also began decreasing. In 2015, 839 babies were born in Haenam, but the number dropped to 640 in 2017 and 513 last year. Suspicions were raised that families were abusing the system. They gave birth in the county, received grants and left, officials said.

According to Haenam officials, since they started giving out childbirth support grants in 2012, a total of 5,069 children were born from 2012 to 2018. However, the number of children under five in Haenam was just 3,337, according to the Ministry of Public Administration and Security’s current list of registered residents. This means the other 1,732 have moved out.

During the same period, Haenam gave grants to the parents of 5,257 children. Over seven years, Haenam spent over 17.9 billion won of child grants.

“It is not just a problem of abusing the system,” said a Haenam official. “It is a structural problem that people are avoiding rural farming towns.”

Haenam is not the only place that has problems keeping children within their counties. Most local governments are implementing similar programs, but there are few successful cases. Goesan County in North Chungcheong is another example.

As of now, the county government gives 2 million won to parents for their first child if the parents reside in Goesan for more than one year. With a second child, they are eligible for 3 million won, and a third, 10 million won.

The amount of money has been increased significantly from when the system was first introduced in 2005.

Goesan’s overall population increased, even though the number of newborns decreased and elderly deaths increased. The population of the county increased from 37,066 in 2008 to 39,113 in 2018. Most of this was due to Jungwon University opening in 2009, the Army Cadet Military School’s relocation to the area and people moving to the Daeje Industrial Complex in 2011.

It turns out the population increase was not spurred by the childbirth grants, but from people moving into the county from outside. Local governments are now trying to invite in industrial complexes to increase their population and create jobs. Some local governments are coming up with ideas to maximize the effects of their childbirth grants by distributing the money in different ways.

There were some undesirable effects. In 2017, 93 mothers, or 37 percent of the total number of mothers who delivered babies in Yeongdong, registered as residents of the county less than a year ago.

Public administration experts point out that there are limitations to preventing population loss with monetary incentives.

“Trying to increase population with money will likely cause competition between regions and will end up as a temporary solution,” said Yuk Dong-il, a professor of public administration at Chungnam National University. “It is belated, but the local governments must tackle housing, environmental and educational issues more comprehensively by merging their districts.”

Others say the grant program should be improved to maximize its effectiveness.

“I recently surveyed the grant programs of all South Jeolla areas, and they were effective in increasing childbirth,” said Woo Seung-hee, a member of the South Jeolla Provincial Legislative Council. “We need to revise the current program of giving an increased amount to a family whenever they have an additional baby. Instead, we should create policies to offer support that are specifically targeted for a child’s growth, such as child care and education programs.”

An official from the Haenam childbirth promotion team said the county plans to maintain its current childbirth policy for the moment and focus on creating jobs.