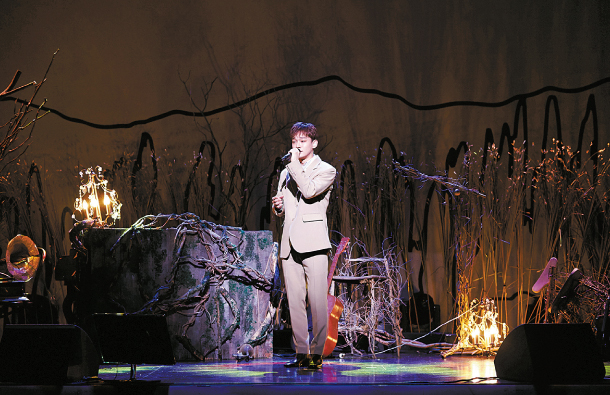 From high to low, Chen has been hitting all the notes for boy band Exo’s songs as the group’s lead vocalist, but now he’s here to prove more. On Monday, Chen dropped his first solo EP “April, and a flower,” a six-track album consisting of ballads all made to suit his unique voice.

“This is my first solo album since my debut seven years ago,” Chen said while meeting local press on Monday afternoon at a showcase that was emceed by fellow Exo member Xiumin. “I’ve worked on tracks outside of Exo, but this is my first time making a full album with only my voice.”

“I was quite strict on myself because it was my first time doing this. I prepared for it thinking that I wanted to improve on the things that I had been falling short of so far, so I reflected and really practiced a lot,” he added.

The lead track “Beautiful goodbye” was released on Sunday for fans who were eager to hear what he had in store. The music video hit 1.2 million views on YouTube within just 12 hours of its release, and the comments were filled with fans thanking the singer for kicking off April with such a touching song. He sings about the pains of watching his lover turn away from him during the blooming spring.

In “Beautiful goodbye,” Chen readies himself for an imminent breakup while remembering the day when he first met his better half. Now he must watch her distancing herself from him. “Let’s turn our steps away when April is over, let’s smile, smile, until our last goodbye is beautiful,” sings Chen accompanied only by a single piano melody.

“It’s not saying, ‘Let’s break up because it’s April.’ On the contrary, it’s saying, ‘Even though I know you don’t love me anymore, I love you nonetheless and I need you to give me at least a month to say goodbye to you,’” he explained.

Versatile may be the right word to describe the Exo member, who has not only perfectly pulled off the complicated choreography that comes with Exo’s biggest hits while singing flawlessly, but has also added an edgy touch to the songs by participating in writing the group’s “Ko Ko Bop” (2017) and “Love Shot” (2018), as well as his latest single “Beautiful goodbye.”

“This album’s titled ‘April, and a flower,’ and wouldn’t you say that even the title feels like spring? I worked with a lot of professional producers on the songs, and filled the album with tracks to suit spring. I think that it will be a chance for fans to hear something different from what I’ve been doing in the past,” Chen said.

Despite having released solo tracks in the past, it took some time for him to gather the courage for a solo EP, according to the singer. “I’m very well aware of my limits, and there are just so many people out there who are good at singing. I wanted my first solo album to be perfect, which is why I needed the time to fulfill my wish as best as I could,” he said.

“Other members of Exo are also good at singing,” said Chen. “Like Baekhyun, who’s so good. I especially like D.O.’s voice a lot. And though it’s hard for me to say that I have anything better than they do, I think that my voice could be seen as clean and pure. And I hope that it becomes my strong point,” he said.

Chen is the second member of the group to release a solo album - Lay dropped his first solo work in 2016. He has also recently opened up a YouTube channel in March, which garnered over 800,000 subscribers in two weeks. It was meant for fans, but now it’s given him the energy to work harder.

“I’m so grateful for all the attention, even though I’ve uploaded just two videos so far,” he said. “I haven’t been that into social media, but I’ve learned both the importance of communicating and leaving a record for me to see myself grow as well. I want to try new things and improve through it.”

Following the release of his EP, Chen held a surprise street performance event instead of holding a staged performance at a big venue like most singers do for loyal fans. The reason he decided to hold an unannounced busking performance instead of a staged showcase was because he hoped to reach to a larger audience who may not have taken the time and effort to go and see the singer if he had not entered their lives on the street.

“I hope to be a singer who can move people’s hearts subtly and slowly for a long time,” said Chen.