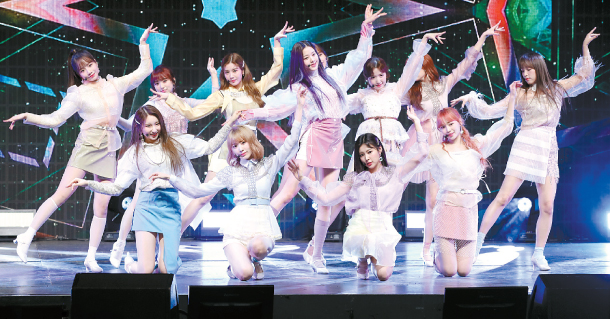 Girl group IZ*ONE performs “Violeta” for the first time during the press showcase for their new EP “HEART*IZ” on Monday at the Blue Square iMarket Hall in central Seoul. [YONHAP]

The month of April brings blooming flowers to gardens and, apparently, the stage as well. When girl group IZ*ONE made their debut in October with their first EP “COLOR*IZ,” its 12 members each flaunted a different color while they performed their first official song “La Vie en Rose.”

If the previous track was meant to show how the 12 girls arrived as powerful rookies with the passion of a rose, the new lead track “Violeta” is all about sharing the energetic mood of the new season to listeners, telling everyone that their hearts are as warm and loving as anyone else’s, much like a violet.

Taken from Oscar Wilde’s tale “The Happy Prince,” the song takes on a blue-and-violet mood from the color of the flower.

“We expressed our hopes to bloom through our passion with our debut album, and this time we want to spread that message to cheer everyone on,” said member Yujin.

Wonyoung added, “It’s a story of our hearts that we want to tell through love and passion.”

It’s been less than a year, but their debut was as grand as ever. Their debut track swept local music charts, while the first edition of their Japanese debut single “Suki to Iwasetai” sold over 220,000 copies when it was released in February.

As happy as they are for having debuted, they’re mostly grateful for the fans who have supported them enough to make all of this happen.

“Since it’s taken from the tale of ‘The Happy Prince,’ we turn into the little bird in the story to pay back all of the love that we received from our fans,” said Chaewon.

The girls will spend two years together as IZ*ONE, during which the members hope that they will get to leave their marks in K-pop.

“We want to be a group that communicates well with the fans,” said Sakura.

“We will also be holding our first solo concert in June, and I hope you look forward to it,” announced Eunbi.

The EP was released at 7 p.m. during a special episode of “Heart To” on cable channel Mnet.